You are here: Home / Fiction / Mystery/Suspense / Awake by Melanie Surani 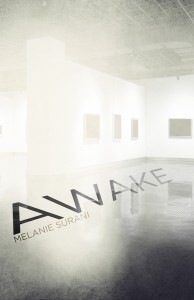 In author Melanie Surani’s edgy thriller novel, opera singer Joshua Gray wakes in an eerie art museum exhibit. He comes to believe he’s been kidnapped and abandoned. And he isn’t the only one…

As Josh and four others struggle to piece together their new realty, they discover the museum’s main building has been razed and the place is boarded with no obvious exit. Who left them in the museum and why? How can they escape? The only link that binds them together is a mysterious woman named Blair, who they each encountered before blacking out. Josh unexpectedly finds himself drawn to one of the other captives, a long-time fan named Sophia. Their attraction plunges the group into a dark pool of suspicion. When allegiances shift and pieces connect, the strangers are forced to reassess their situation. Is the real danger inside or outside of the museum

Suspenseful, romantic and filled with drama, Awake will keep you up all night.

What Inspired You to Write Your Book?
I wrote a novel when I was a teenager about a man who went on a quest to find his lost friend, and he eventually gets trapped in a museum while asking for information (parts of which were based on a dream I’d had). I loved the novel, but could never get it to settle into a final form, and I eventually abandoned it. Years later, I re-read the book and thought I could salvage it if I reworked a few things. I gutted the characters and started from a completely different premise. Today, the two stories are only vaguely similar.

How Did You Come up With Your Characters?
The characters in Awake went through a lot of changes. Even forgetting about the previous novel incarnation, I had at least five more main characters who got cut from the final edition. They changed names, a few of them switched personalities when they weren’t behaving right.
Each character (in any book I write) contains some of me, and some of what I’ve observed in others. These characters in particular have to deal with some dark circumstances, and they evolved a lot over time. It’s a little strange to go back and read the first draft.

Book Sample
Blair didn’t go to the theater for a night of opera, but to kidnap Sophia Stewart. At the last minute, she bought a ticket and followed cues around the old, gilded theater to her seat in the topmost balcony. The seating sloped straight down, in hopes of giving each ticket holder the best seat in the house, though Blair’s spot in the nosebleeds barely made the trip upstairs worth taking, if her goal had been to see anything on stage.
The house lights dimmed and rose again, signaling everyone to take their seats.
Sophia had already taken her spot, smoothed her dress and glanced around with shining, eager eyes. Her hair hung over her shoulders in loose brown waves, pinned over one ear with a peacock feather. The seat beside her was empty.
She’s waiting for a date. Two for one if he’s good looking.
Despite the suits and pearls and floral ensembles around her, Blair hadn’t dressed for a fancy night out. She hadn’t been to an opera or symphony in so long she didn’t realize dressing up was still a big deal at these things. A blue button-down shirt, dark jeans, and a ponytail were all Blair could muster on her rush to get to the theater.
Everyone’s sure to remember Sophia’s purple sequined dress, even if they don’t remember me.
“Need help finding your seat?” An elderly usher smiled at her. “Show me your ticket.”
Blair handed him the stub she’d mangled in her sweaty palm. The usher eyeballed it through reading glasses, checked the numbers on the seats beside him, and let out a surprised noise. “This is your row,” he said. “If it was a snake, it woulda bit ya.”
Blair smiled dutifully.
The empty seat next to Sophia belonged to Blair. She hadn’t expected to get near her object short of following her; now she’d have to spend the next two hours trying not to engage in small talk.
If she’d had time to plan — any time at all — she would have done something better than grabbing her supplies and rushing to the venue to buy a ticket at the window. The fact was, she’d fantasized about kidnapping Sophia since they’d met at Blair’s brother’s last office party, but fantasy didn’t translate to a workable plan. It would be easy enough to lure her away from a group at the theater. I’m new here; how do you get to xyz? New York was painfully easy that way.
Her intelligence about Sophia Stewart that evening came from her brother David, who’d said Sophia was trying to get out of mandatory overtime to see a show. With the way this chick was acting, she’d lose her job and Blair might never find her again. Her career depended on her bagging Sophia.
“Do me a favor,” David had said, calling in the middle of a tv dinner. Blair had paused work on a painting to gather inspiration from the latest hair-pulling reality show.
“What?”
“Your girl crush, Sophia Stewart is awol.”
Sophia wasn’t a crush — not exactly — but she didn’t dare divulge to her brother what she really wanted with his employee.
“What the hell do you want me to do about it?”
“She went to a show. It isn’t a secret.”
Blair’s interest piqued. She hadn’t been able to figure out a way to get to Sophia out of the office — away from her brother.
“I need you to deliver a message for me.”
“God dammit, David, what are you? The fucking mafia?” She tossed the plastic dish on the cluttered coffee table. “Send a message,” she mocked. But while David was still talking, Blair interrupted, “Where’s this show? It’ll be impossible to locate one person in a New York City auditorium, but what the hell?”
He gave her the address, whatever horse-shit message he wanted to leave his employee, and Blair bolted for the theater.