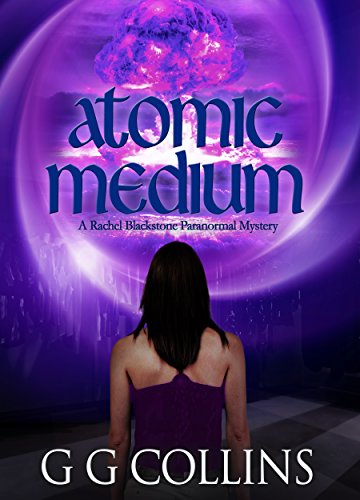 “We’re three women from two different centuries, trying to save the world from oblivion. I don’t know about you, but that’s way above my pay grade.”

A time warp has opened in a popular Santa Fe retail store. The building housing the shop was the main office of The Manhattan Project during WWII in the 1940s. Only one person has witnessed the departure of two dangerous men through the dark doorway to the past–reporter Rachel Blackstone, the reluctant psychic. Although she is certain they are evil she has no idea how they left 2015 or where they landed on the other side, only that she saw them do it. But the office on the other side is certainly a very different place than the showroom with the neatly arranged inventory of gifts and Native American art. When Rachel uncovers the supernatural mystery of the room, threats are made and people die. But is it fantasy or fact? It becomes apparent at least one man is an alien force wearing a Nazi uniform—and intent on changing the balance of nuclear weapons in the world—thanks to Hitler’s belief in the occult and alien life forms. Rachel and friend Chloe, women sleuths by accident, time travel to a world of secrets, subterfuge and danger. If they can’t stop the two men intent on sabotage, history will be altered. In this paranormal thriller, Rachel and Chloe find it’s no small task: just save the world.

What Inspired You to Write Your Book?
2015 was the 70th anniversary of the Trinity Test in New Mexico. I've been interested in WWII for some time and this seemed an opportunity for my protagonist, reporter Rachel Blackstone, to have an adventure and tell some history simultaneously. I researched the Atomic City of Los Alamos to get a feel for both the time and place. I found old photos of the housing and where the staff worked. It was fascinating placing these two very 2015 women into 1945 and turning them loose with an alien portraying a Nazi soldier out to change history.

How Did You Come up With Your Characters?
I've done stories with an evil spirit and a Mesoamerican deity that dines on humans, it seemed only right to do one with an alien. Its time had come. This is the third book in the Rachel Blackstone Paranormal Mystery series. I invented Rachel and her friend Chloe Valdez as best friends who solve paranormal mysteries. I wanted Rachel to have an interesting work life and so I added Stella Dallas, the receptionist at High Desert Country magazine (Yes, her mother was a Barbara Stanwyk fan.) Julian Brazos is the publisher and editor, who can get annoyed when Rachel has these supernatural outings that interfere with work. Later I added other characters, some who help her and others who don't. But her most unusual friend is her spirit wolf who receives a name in the 2nd book, Lemurian Medium.

Book Sample
Rachel Blackstone, the Reluctant Medium, counsels with her friend former priest Eddy O’Brien. He advises her to walk a labyrinth to gain insight to her predicament. While doing so she sees the dead shaman Joseph and learns the story of her spirit wolf. We pick up where Eddy encourages her to walk. (Copyright 2015)

“The labyrinth will guide you. I’m going to wait here in the car. If anyone comes, I’ll delay them so you can complete your walk. It is your journey.”

“Should I ask a question?” Rachel asked, stalling. “Something specific?”

Rachel nodded. At first she looked down at the heavily trod path edged in stones. The ground was hard and dry beneath her mocs. She was grateful for their thick lug soles. The red sun was sinking deeper into the cosmos. The sunset colors played across the labyrinth mixing with the dust in the air. She thought it must be what star dust looked like; fine particles in magic shades drifting through space. The shadows of nearby piñon crossed her path here and there, moving as she did. As she strolled the first circuit she was aware of not really wanting to do it, but as she moved deeper into the labyrinth she became more engrossed.

Like yoga, she found as her concentration increased, the distressing concerns of her day faded away. Rachel had heard of walking meditation and attempted to do that. There had to be some presence in the moment or she might stray from the path, but yet she needed to allow her mind to quiet.

As she finished each track a little more of the environmental noise dropped away: traffic, construction, all man made sounds. She was no longer aware of the rustling leaves or chirping birds. Rachel closed her eyes. For a moment she felt as if she floated among the enchanted airborne particles.

But as the quiet settled, another noise began to intrude. It was familiar. Just she had experienced in her living room months ago when she performed the ceremony to return the dead, she picked up on some subtle crackling almost as if the air overflowed with electricity. Yet she felt no evidence of it. Rachel held her ground and closed her eyes. There was a faint rattling.

“Oh no,” she whispered and opened her eyes, fearing what she would see.

In the gathering dusk, fog seemed to flow from all directions, despite the persistent dry air. She hurried.

“Should I get the hell out of here?” she muttered to herself.

By the time she reached the center, the vapor was meeting and began spiraling upward, each strand wrapping around what appeared to be an empty center, but it created a perfect human-shaped mist.

It’s happening again. And she was afraid. She closed her eyes once again and fought down the panic. Grappling for control so she wouldn’t run, she tried to prepare herself for anything. Would there be another Nazi to manage? Or was she dealing with another evil entity?

Calm down. Take a deep breath. Rachel tried to do this simple breath, but with her fight or flight instincts all amassed and at ready, she could hardly inhale.

Open your eyes. Slowly, looking down first, she glimpsed a pair of bare feet. Having expected something military in nature, this confused her. When she raised her line of vision, there was Joseph standing before her, smiling with some amusement. His skin was brown from decades in the sun and his eyes laced with lines from squinting. He was a slight man, but a giant spiritually. Rachel could see aura glowing around him. Usually he wore the white aura of a spiritual guide, but today he it was the purest of blue which she knew to represent harmony and great understanding of people and other creatures.

While he never spoke aloud, he was telling her a story. At first, she didn’t get it, but then it became clear he was talking about her spirit wolf, Kiyiya. The white wolf had been different all his life. Although his parents had been alphas in his family pack, and therefore he was deserving of respect, he had been aware that others judged him as unusual.

One day while drinking at a stream he took a moment to look at his reflection. He felt both exhilaration and shame at his differentness. He wanted to be like the other wolves. Troubled, he asked his mother why his fur was white as snow. She recognized his need for reassurance and told him white wolves were destined for greatness in the spirit world. Someday, he would understand why he had been created this way.

For several years, he lived with his pack, hunted with them, played with his siblings and howled into the night. It was a good life, but something seemed to be missing. On a particularly cold, crisp winter day, he arose early and strode up the rocks in search of food. Just as he was about to catch a rabbit he felt a sharp pain in his chest.

The falling was more frightening than painful, but as he continued to fall his rate of descent slowed and the terrain changed from mountainous to cloudy and then to night. He slowly righted himself as if he were a cat and landed on his feet in a place he didn’t know. A woman stood outside of a car in the middle of a big road. Confronted by a ghostly figure, she was alarmed. Instinctively, he knew she must be protected. His presence frightened the spirit away but also the woman. When he showed her no aggression she returned to her car to continue her way. Somehow he knew her journey was important.

In his new world he would shield others as well, but this woman was to be sheltered at all times. As he grew in the wisdom given by the Great Spirit, he learned ways of helping her when she was confused. His body could glow when light was needed. His shadow could change in size and shape. When he howled she knew that danger was near. She had much to learn, but he felt she had vital work to do.

And so he came to understand what his mother had told him. He was destined for greatness and he would do his very best to make her proud.

Rachel became cognizant of where she was and the tears streaming down her face. She began to sag but strong arms caught her.

Let me help you. Joseph found this way into her mind again. She felt sleepy and foggy and tried to shake it off.

“But what about the threshold?” Rachel said aloud. “Should I cross it?”

You will receive a message from the other side. It will come from an unlikely source. Be open to it. It will be true.

Rachel stepped over the stones and sat on a nearby bench. She was exhausted, drained. After resting for a few minutes, she returned to the parking lot where Eddy waited.

“Did you get what you needed?” he asked. “Was there an answer?”

“Yes,” she said. “It wasn’t the answer I was looking for, but it was something I wanted to know.” She described meeting Joseph and what he said.

“You had a spiritual experience,” Eddy replied. “You have arrived.”