You are here: Home / Fiction / Fantasy / Athena’s Descendants and the Jewel of Barthimia by Callum Espley Clegg @callumeclegg 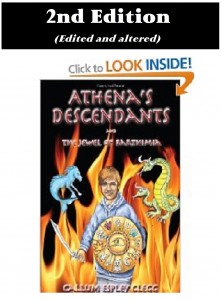 After two tiresome years of searching, the twelve ring bearers are finally united. When Jay Perry joins the group, the Gods talk of a quest which they must undertake. Five must fight their way around the globe to find the powerful Jewel of Barthimia, sending all mythical encounters back to Hades, back to the dreaded underworld. What might they find? Will they even return? Will Athena’s descendants continue to fill their destiny as protectors of Olympus?

Find out in this gripping novel, the start of a thrilling series following the twelve ring-bearers on their nail-biting quests. The prophecy has begun. The reign of the ancient Gods is coming to an end. Only twelve talented youths may take their place. These youths, are Athena’s descendants.

What Inspired You to Write Your Book?
The amazing word of Greek Mythology and the magnificent stories of Harry Potter and Percy Jackson.

How Did You Come up With Your Characters?
Most of my characters are based around real people but obviously their traits are influenced fantastically by the beautiful theme of magic.

Book Sample
“Three shall leave for the land of the severed, Must fight off the ones who guard one that’s tethered, Must sail the seas to talk with the sun, And finish the quest before it’s begun. The twelve will unite for the first time, Against one of the ones of the deadly crime, The sky is poisoned and the twelve are tried, As the one sandaled man carries at his side.”

Phrase: “A book isn’t a book without an ounce of humour, a speck of suspense and one great big spoon of a magical and unexpected twist!”