You are here: Home / Bargains and Freebies / Bargain Books Under $3 / April’s Heart by Shilah Ferr 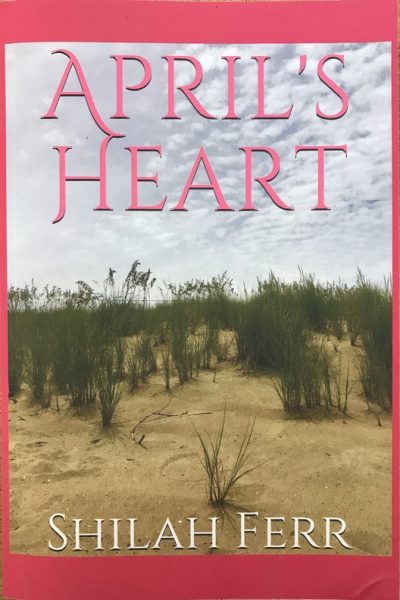 Autumn 1977. Thirteen year old cheerleader April Schweiter falls hard for Mitch Hudgins, putting an end to childhood and changing her life forever. April embarks on a coming of age journey full of angst and unanswered questions. And her dysfunctional family is only one of the problems in her way.

Classmate and wrestler Mitch Hudgins can’t get enough of April either. She stirs in him surprising passion that is new, unfamiliar and needs to be explored.

“You guys are the nicest friends anyone could have!” April choked down a sob. She was still emotional at the realization of the future of her romance with the guy who took her virginity, the guy who once told her he loved her, the guy she fought for, the guy with whom she was really very happy with. She was heartbroken but didn’t know it yet.

This romance novel is the story of young love, hot and heavy, with all the drama of high school in the eighties. The ebook contains almost 40 Spotify music links on all the songs in the story, taking you there.

“What are we going to do Mitch?” April whispered.
“I don’t know April, I just don’t see how…” This time it was April who kissed him. She didn’t want him to say what he was going to say. Mitch didn’t want to say it anyway. They wanted things to stay the way they were, but that was impossible.

Find out what happens to the star crossed lovers with the on again, off again romance riddled with breakups.

What Inspired You to Write Your Book?
My writing journey started as I pondered if I had a book in me while I took my daily “power walks” around and around my neighborhood. I thought about the diaries and scrapbooks I kept while growing up, that were sitting up in my attic. Surely all that documentation would be useful.
One day while on my walk, I had the idea to take all the romances I had back in the day, and turn it into one long relationship. Once I had that idea, I was good to go!

To write the best story possible, I realized that being completely authentic was of paramount importance. I remember a famous fiction author saying that although her story is fiction, there is nothing in it that didn’t really happen in real life. That is completely true of April’s Heart as well.

I felt everything I wrote had to be pretty much exactly the way it was. The big things and the small. This made the writing a little easier because I had such a strong picture in my mind, right down to the hand gestures of a character. I wanted my readers to have the same picture in their heads as I did in mine. That was really important to me.

How Did You Come up With Your Characters?
April Schweiter is loosely modeled after myself, so I cast April as a cheerleader just as I was myself back in the day. Although a work of fiction, April’s Heart follows the basic outline of my own life and the authenticity of the character's thoughts, feelings and actions were extremely important to me as I wrote it. When thinking about what makes April tick, you realize April has a strong desire for love and popularity. Her mother is standing in her way of creating a social life. April feels she has no choice but find a way anyhow, even if it means breaking rules and risky behavior.

April is me, and the relationship between April and her mother IS the relationship I had with my mother. Much of my personality is reflected in April, again relying on true and realistic details that helped create an authentic story to the point of feeling butterflies or shedding tears. I remember wavering between exuding confidence, then feeling unsure, questioning the motives and intentions of others. I remember getting in trouble at home, blaming only my mother, not how my own actions contributed to the problem, feeling oppressed by her. And as realistically as I could portray, April learns, grows and matures in much the same way as I did.

Book Sample
Mitch and April made plans to meet at the pool. He waited for her just inside the entrance structure, in the shade. She walked up in her string bikini top and cut off jean shorts. The fly was splayed open, a sexy little look that exposed a little more of her tight belly.

Holy crap! God love her, thought Mitch feeling his erection beginning already. She saw him leaning against the wall on his hands. April said goodbye to Janet who walked through the entrance and into the brightness of the sunshine to find her friends.

April walked up to Mitch, and seeing his hair in his face, pushed her hand through his hair for him. It was such an intimate gesture. No words were spoken. Her hands in his hair was her way of saying hello.

Quick as a wink he had switched places with her and had her up against the wall. They looked into each other's eyes. They were desirous for each other in the worst way. April's heart was pounding in her chest. She was nervous. It had been such a long time. He put his hand over her heart to feel it, confirming for April that if your heart beats loud enough, another person CAN hear it. She filled her lungs with air taking a deep breath. He moved his hands behind her neck and kissed her, passionately, for a small moment breathing her in. They were standing in a public place.

"We gotta get out of here," Mitchell said.

"No swimming?" April teased. He paused for a moment, not sure if she was serious or not. After all, they hadn't seen or spoken to each other in a long time. Maybe he was getting ahead of himself.

Hmmm, April in the pool all wet, Mitchell hardened at the thought. He recalled a dream he had like that. April in the ocean. He came in his sleep that night.

He looked at her to read her face. She cocked her head to the side and smiled. God love her, he told himself for the second time in twenty minutes. He smiled at her, grabbed her hand, and walked back out the entrance. They never even made it into the sunshine of the huge pool deck. Maybe they knew it all along, but they had other plans. They walked back to Mitchell's house. His parents were at work as usual.