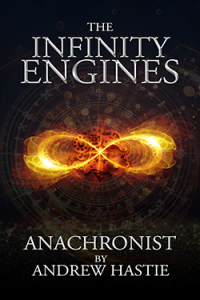 If you’re a fan of Harry Potter and Doctor Who you will love this fast-paced time travel adventure! Set in a unique world not bound by the rules of time, it takes you on an epic journey into the forgotten past.

History is not as stable as you may think. The guilds of the Oblivion Order patrol the paths of the past, using the timelines of artifacts to navigate through back through time. They are the agents of change, the ones responsible for keeping the continuum on track – saving us from obliteration.

When a troubled seventeen-year-old, Josh, breaks into the house of the local eccentric, he finds himself drawn into the strange and secret world of the Order. He discovers that he too can travel through time and when he meets the beautiful Caitlin, Josh realizes he has a chance at a better future, but it’s one that means changing his past and that is strictly forbidden.

What Inspired You to Write Your Book?
This book was inspired by the classic SciFi TV I used to watch as a kid in the seventies. Doctor Who, Blake's 7 and The Tomorrow People were just some of the influences. I wanted to create my own time travel narrative that looked at the genre in a new way.

How Did You Come up With Your Characters?
The characters are based on people that I have met or parts of them at least. There is also some of me in there too…

Book Sample
The colonel nodded. ‘Good. You’re not as stupid as you look. Now, let me see, which variation does this hail from? Hmm. Fourth or maybe fifteenth variant.’
He muttered a stream of random numbers and probabilities as he consulted his notebook. Page after page of nonsensical symbols flickered in front of Josh’s nose, symbols that looked a lot like the ones on his hand. He pulled his sleeve down a little further.
‘Yes. Stauffenberg. Tried to kill Hitler in 11.944, sorry 1944. I sometimes forget the temporal context.’ He closed the notebook and placed the medal on the side, taking off his pink glove with a thwack.
‘He succeeded.’ Josh blurted. The colonel obviously knew his history so he thought that maybe the man might be able to help solve the mystery.
‘What?’ The colonel’s eyes narrowed.
‘The past has changed somehow. I was taught that Stauffenberg killed Hitler. The Second World War finished in 1944. But no one seems to remember that any more!’ Josh blurted it out quickly before he changed his mind, but it still sounded completely mental.
This disturbed the old man, who became very flustered and went off to rummage through a set of drawers, mumbling to himself about remembering where he put something.
He returned to Josh and held out a handful of old dice.
‘Throw these,’ he demanded, closing his fist and shaking them.
Josh took the dice and threw them onto the floor. They all came up sixes.
‘Six sixes,’ the colonel said as he gathered them back up. ‘One in 46,656.’
‘What does that mean?’ asked Josh.
‘Highly unlikely,’ the colonel mumbled as he pulled out an old pack of playing cards. ‘Pick four cards at random.’
Josh did as he was told. They were all aces.
‘What are the chances of that?’ said Josh.
‘One in 265,825,’ replied the colonel. ‘You’re right – something is very definitely out of kilter.’
He consulted something in his notebook and then went to the large stacks of newspapers and began to rifle through them. They appeared to be in chronological order as the old man worked his way over the years, calling them out as he checked a random date from each.
‘Well, don’t just stand there! Look for 1944,’ he barked at Josh as he pulled the papers out.
Josh chose a yellowing edition of The Times dated 1812. Its headline read ‘American Attack on Kingston Harbour’.
‘American War of Independence. Wrong end. Wrong century. You need to start over there.’ The colonel, who was halfway up a small ladder, was pointing to a spot a few stacks to his left.
Josh put the newspaper back carefully and moved past the colonel. He climbed the stairs and began searching the upper parts of the stacks.
‘What exactly am I looking for?’ he asked.
‘A date. And, if possible, a time and a bloody location.’
Josh had more luck on his third attempt. It was from the right year. 1944. But too early: the news was mostly of battles and propaganda about the war.
Then he found it: 21 July 1944 edition. It came quickly out of the pile – as if it were waiting to be discovered. Although the edges were a little tattered, the paper itself was still crisp and white, as if it had just been delivered that morning. It was strange to think that it was nearly seventy years old, that it had been printed before his grandparents had been born.
‘Got it,’ Josh shouted, holding up the paper. The colonel jumped down off the ladder and snatched it out of his hands.
‘Good. Now where is it?’ he muttered, flicking through the pages without any respect for the age of the document. ‘Ah. Richardson. Now he was a real war correspondent. Got to the heart of the matter. None of this celebrity blather we have to put up with these days.’
The colonel folded the paper over so that Josh could see the page. There was a blurry photo, taken from a distance, and some copy about the location. ‘Wolf’s Lair . . . rings a bell. Think that’s in Poland somewhere . . .10.20am. 20 July 1944. So that would be sometime along the lines of 71.3219.’
‘71.3219 of what exactly?’
‘Years – approximately. I could wait for the clackers at HQ to send me the exact details.’ He pointed at the notebook. ‘But they’re getting awfully slow these days, and we don’t need to be to the exact second.’