You are here: Home / Fiction / Amnesia of June Bugs by Jackson Bliss 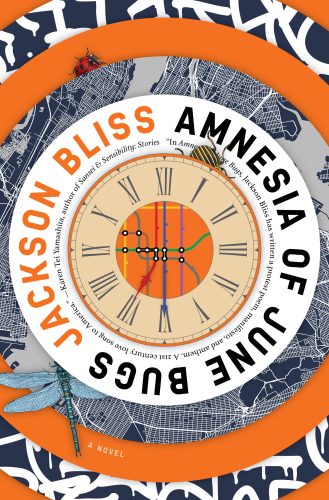 AMNESIA OF JUNE BUGS redefines what a novel can be. Hurricane Sandy has just smashed into the Eastern Seaboard, trapping four passengers on the C train: a Chinese American graffiti artist grieving his father’s death, a mixed-race graphic designer struggling to become a mom, a Moroccan French translator escaping his heartache in Paris, and an Indian American traveler leaving Chicago to regain control of her life. Amnesia of June Bugs is an ambitious, infatuated, and furious book about the time we lost and the people we could have loved.

What Inspired You to Write Your Book?
Since the beginning of my MFA, I wanted to write a really ambitious, multicultural, and experimental novel about four BIPOC characters whose lives intersected during a moment of crisis (in this case, Hurricane Sandy). I wanted the language to be a live wire. I wanted these characters to be complicated, layered, confusing, interesting, their humanity developed and defended. I wanted to write a New York novel. And I wanted the momentary intersection of these characters to be only fully understood by the reader, who is the only person who has all of the information and back story about them. The characters themselves don't (and can't) really understand the full significance of their paths crossing but readers do and what we know is a little bit devastating.

Beyond that, I wanted to write a high concept novel about Asian American and BIPOC people I would have loved to have read growing up: a novel that expects a lot of its readers, doesn't insult their intelligence or treat them like clueless children, and rewards them for their intelligence, devotion, patience, hard work, and sensitivity. Hopefully, I did that. All in all, this is probably going to be the one and only NYC novel I ever write. The next's one's going to be about LA!

How Did You Come up With Your Characters?
I think of my long form work cinematically, so I imagine the characters a little at a time in movie form inside my head. If I can picture them, I can create them. So, I start by thinking of the kinds of characters I don't see enough of that I wish I saw more of in novels. I think about mixed-race/AAPI/BIPOC characters I'd like to write. The first thing I do is figure out their race, name, story, and current residence. I say their names out loud to see how they feel, how the syllables land, and to test its meter too. If I still love a character's name after I've done that for awhile, I keep it and then I slowly figure out who they are a little at a time. I take notes, sometimes 10-20 pages of biographical notes. I slowly fill in that character's life, genealogy, birthplace, education, pet peeves, favorite food and books, best and worst relationships, etc., etc. until I've got a real sense of who they are and who might become. Eventually, I start writing that character in a couple scenes until they start to have their own autonomy and find their own voice, which takes time. Then I step back and let them take over, which is one of the greatest joys in the artistic process for me.