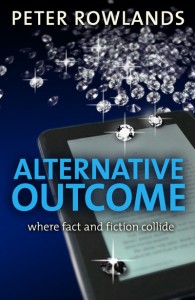 Mike Stanhope, unfulfilled by his job as a freelance journalist working in London and depressed following his divorce, has self-published a mystery novel online, hoping to shift his life on to a different tack. He built his book round true events, though he invented much of the background story, but on hearing about it, well-meaning friends now urge him to track down one of the real-life characters he has featured in the book – a girl he knew long ago.

Unsettling events follow: a website hack, a theft, a kidnap attempt. Initially Mike concludes all this has been sparked by an investigative article he once wrote for a magazine, so he works on a plan to confront the people his article was about. However, gradually he starts to wonder if the intimidation could be connected with his search for the girl, or even with his book.

Meanwhile, Mike presses on with his search. He visits the area in Cornwall where he originally met the girl, and gets to know a young woman living there. She is not the same girl, but he is drawn to her. She is engaged to a local man, but there is clearly a spark between them.

Back in London, pressure is on Mike to write a revealing article about a freighting company that could be close to collapse. To head him off, its canny CEO dangles in front of Mike the prospect of getting his e-book published in print through an associate company. Mike is uncertain how to deal with this moral dilemma.

Fact and fiction become increasingly intertwined as Mike puzzles over what really happened in the story behind his book. As events pick up pace, he finally begins to appreciate what is lies behind the threats to him, but he has to deal with an even more aggressive confrontation and contend with several surprising reverses and revelations before the story reaches a resolution.

What Inspired You to Write Your Book?
The self-publishing revolution is a fascinating phenomenon, and I wanted to write a book in which this development would actually be part of the plot. It opened up so many possibilities: story within story, and fact and fiction intertwining. It allowed me to create a multi-faceted plot, with plenty of opportunity for false trails and misunderstandings. I also wanted to take the opportunity to tell a story set in a world I knew from personal experience – picking up strands of my own past, and weaving them into something richer and more complex than the reality.

How Did You Come up With Your Characters?
My leading character is inevitably a version of me – but an exaggerated version: more downbeat, but also more resourceful, more energetic, and more impulsive in picking up challenges and acting immediately on them. Other characters are mostly composites based very loosely on real people I’ve known in business and journalism – again exaggerated and given characteristics I’ve never known in real acquaintances. The main female character is also based on real people I’ve known; in some ways she’s an “idealised” woman, but she’s not ideal in a perfect way, rather ideal in a specific and rather quirky way, with occasional moods and edginess to offset her overall good nature.

Book Sample
“What’s your book about?” John grinned at me amiably over Joanna’s improvised goulash.
He was a happy soul; with his florid complexion, upstanding red hair and thickset build, he looked exactly like the rugby player he had been until recently, and he radiated a rugby player’s confident goodwill.
I said, “It’s a mystery story based round a robbery from a security van. Most of the gang are caught, but one of them escapes and disappears off the face of the earth. The main part of the story is about a man who tries to track him down many years later.”
John looked at me expectantly, so I added, “I based it vaguely on a real robbery back in the nineteen eighties.”
“Right.” He pondered this a moment. “And will it be published in print as well as online?”
“Huh! I doubt it. There’s too much competition.”
He nodded, perhaps searching for something else to ask. “So in real life, were all the thieves caught?”
I’d had this same reaction from one or two other people who’d asked about the book. For some reason they seemed more interested in the real story than in what I’d made of it in my novel.
Barely swallowing my frustration, I said, “Well, no one really knows. According to folklore one of them did get away, but there’s no definitive evidence. I’ve simply hypothesised that he did.” I paused, then said with exaggerated patience, “It was the underlying idea that interested me, not the real-life specifics.”
I caught Joanna giving John a warning glance, and immediately felt guilty. These were good friends. I shouldn’t be allowing my jaded attitude to upset them.
John merely said, “Ah, OK. So what happens in your story then?”
I was tempted to say “Read the book”, but this time I managed to bite my tongue. I’d already reached the conclusion he was never going to, so what was the point?
When I’d embarked on the book, I had naively assumed that all my friends and acquaintances would be pressing me for sight of it as soon as it was ready, but I’d soon found that many of them seemed resoundingly underwhelmed by the idea. I hadn’t decided yet whether this was simply because they weren’t interested in mystery thrillers, or because they couldn’t conceive of a world in which I would be capable of writing one that they would want to read.
I took a deep breath and made an effort. “Well, the book follows the fortunes of the man who escaped, and his family.” I hesitated. “I based the family on real life too, but the people I had in mind had nothing to do with the actual robbery. It was a family I came across on holiday when I was young. I tried to contact them years later, but no one knew what happened to them. They seemed to have disappeared. It seemed like a cue for a mystery story.”
Joanna shot me an accusing look. “You never told me about that.”
“I don’t tell you everything.”