You are here: Home / Fiction / Mystery/Suspense / All The Hungry Ghosts by Math Bird 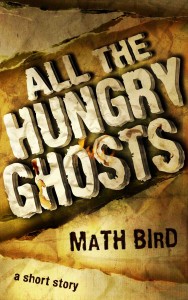 A disfigured henchman haunted by his past. A lonely, abused internet bride. Brought together by their hatred of one man and an ancient Chinese ceremony designed to appease the ghosts that curse them. What begins as harmless superstition quickly leads to jealousy, revenge and murder.

What Inspired You to Write Your Book?
I love crime and noir fiction, and after a visit to Beijing and watching people burn paper shapes to appease the souls of lost loved ones, it inspired to write this story.

How Did You Come up With Your Characters?
They’re influenced by the clever, stupid, vicious, kind, jealous, loving, and crazy things people do. They’re a mix of people I’ve seen, heard about or imagined. There ideal for stories, but I wouldn’t want to live next door to most of them.

Book Sample
IT HAD BEEN FOUR DAYS NOW and still there was no news of Johnny. Cai read once that sometimes it could take several months. There were so many variables, the current, the tide, and how heavily the body had been weighted. It also depended on how far the body drifted out and how long the sea decided to claim it. As a boy, he’d heard so many stories of what the sea was capable of. He’d lie awake for hours, listening to the distant waves, imagining it was the murmur of ghosts.
The rain, which had plagued the town all morning, had eased by the time he got to Morgan’s house. The streets were tainted grey, and the sky still bruised by its memory. Morgan’s young Asian bride greeted Cai at the door. She offered him her hand, her fingers childlike as they brushed across his palm. She tried to say something, but struggled to get her words out. He just nodded, feeling the tenderness of her smile as he followed her into the house. She led him down the hallway, her hair shining beneath the morning light.

Buy All The Hungry Ghosts On Amazon