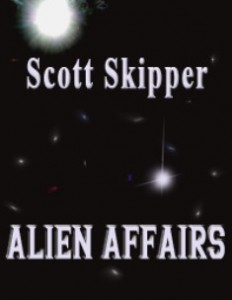 The 1947 flying saucer incident at Roswell, New Mexico, was a secret so closely held that even future presidents were denied access to the truth. The key to that secret fell to the protection of the CIA under the mercurial Allen Dulles who compiled an Alien Affairs team to discover the invaders’ intentions. They did so by deciphering a reading device recovered from the crash site. The extremely devout, yet promiscuous Dulles did not like the answer, but the revelation propelled us to the moon to make sure there was not an alien base there with malignant intent.

In his retirement one of the original Alien Affairs team amuses himself by teaching the aliens’ language to his young niece, Carrie Player, but conceals its origin from her. On his deathbed he reveals the truth and charges her with the minor responsibility of saving humanity. Twenty years later the CIA has fallen complacent, the threat from space becomes eminent and only Carrie can intervene on behalf of the human race.

Georgia Turnbull is the hard-bitten director of the CIA under a weak and indecisive president. When Carrie explains the facts of the approaching aliens’ purpose, Turnbull puts her in charge of the newly revived Department of Alien Affairs and together they devise a two-pronged plan to protect the planet. Since the end of the Space Shuttle program the United States has had no way to send astronauts into space and has to pay the Russians to carry them to the International Space Station, so Turnbull is forced to rely on the private sector to launch weapons capable of intercepting the alien craft.

Carrie’s Alien Affairs staff realizes that she is the only person on earth who might negotiate for our survival. Their plan puts Carrie in a very precarious position—a middle-aged divorced CIA linguist becomes the spokesperson for the planet earth and she finds herself involved in an alien affair that no one could have ever predicted.

What Inspired You to Write Your Book?
On a cross country road trip I went to the Roswell UFO Museum as a skeptic. A couple hours later I stepped into the New Mexico sun, still a skeptic, but I said to myself, “What if that really happened? Why would they keep it a secret?” A few years later it occurred to me. I knew what the big secret was, and I decided I was going to reveal it.

How Did You Come up With Your Characters?
I wanted my alien fighter to be an ordinary person and I wanted a woman, so I used my character development tool and created Carrie Player. Carrie is a forty-something divorcee with an adult daughter. She works as a linguist for the CIA, and she happens to be the only person alive who speaks the aliens’ language. Carrie is tough yet vulnerable. She is witty and doesn’t suffer a fool, especially an extraterrestrial fool.

I like to base characters on real people. It’s important that they have individual personalities and unique speech patterns. When the character is based on a historical person, I’ll try to read something that person wrote, or something written about the person. Carrie Player may be an exception. She may be someone I’d like to know.

Book Sample
Carrie took a call daily from Georgia Turnbull inquiring whether she had spoken with the aliens. “Not a peep out of them. How are things going in California?”
“We’ve delivered twelve SM-3 missiles with tactical nuclear warheads to SpaceX at Vandenberg Air Force Base and their shop in Hawthorne is working around the clock to fabricate explosive bolt brackets to attach them to the capsule. SpaceX made the thing with a cowling that will cover them for takeoff and can be jettisoned later—it’s perfect. You know, of course, you are not in the need to know for any of this?”
“At least you know I won’t be flapping my jaws in the White House pressroom.”
“Call me as soon as that phone rings. How do feel about it?”
“Scared shitless.”
“You’ll do fine.”
Carrie aimed the remote at the television and spent a few minutes with the sound muted watching coverage of a crowd in Times Square. Some carried signs but most wandered looking up occasionally as if expecting to see flying saucers descending on them. “Poor bastards,” she said aloud, “if they only knew.”
She left the office but did not go home. Instead she stopped at a sports bar near her house in Georgetown. Her DC uniform—black pantsuit—drew suspicious looks from some of the more disreputable looking patrons. She ordered chardonnay and glanced around at the flat screens. Most displayed sports but a couple had news feeds of the people milling in front of the White House.
The barmaid noticed where she was looking and said when she parked the wineglass in front of her, “What do they think they’re going to accomplish out there?”
Carrie said without thinking, “They just want to be with other human beings.”
“Yeah, maybe. What do you think they look like?”
Carrie could not help smiling. “I think they are going to look like the aliens we see in the tabloids, little guys with big heads and big black teardrop eyes.”
“Huh. Well, I suppose that image had to come from somewhere. I wonder if they’re gonna make contact this time or just fly around some more.”
“My gut tells me this time there will be contact.”
“I hope you’re wrong. The idea gives me the creeps. It’s good for business, though.” She moved on to take other drink orders.
Carrie felt her phone vibrate. When she looked at the caller ID in the display, it was gibberish. Her heart slammed against her diaphragm. She chugged half the wine, put a napkin on top of the glass and ran outside before the call could go to voicemail. On the sidewalk she tapped the icon and said the normal greeting of the alien language, “Come.”
It took forever for the signal to go and return from interplanetary space. “Come,” a voice said. “You are a very clever creature. Are there many like you now?”
“I am the only person on this planet who can talk to you.”
“How did you manage it?”
“We found your reading device.” She realized that her heart was still racing. “We know why you are coming.”
“It would have been better if you did not.”
“Not for us. We are prepared now to stop you.”
“And how ever could you do that?”
“And why would I be fool enough to tell you?”
“It does make us proud to see how bright our creation has become, but that spark is precisely the reason we must prevent you from getting any smarter.”
“What exactly are you afraid of?”
“We did so well at making you ingenious, but we failed completely at making you passive.”
“That is right, and that is why we are not going to let you destroy us.”
“We are not going to destroy anyone. Look at it this way, everyone will be free to fornicate without need of contraception.”
“Is that your idea of a joke?”
“Actually, I was being serious.”
“What would we have to do to convince you that destroying us is unnecessary?” In the back of her mind she found it surreal to be negotiating for the survival of the species.
“It would not be up to us to make that decision. We have been sent here with orders that must be obeyed.”
“Look, we know where you are. We have the means to intercept and destroy you.”
“You see, it is exactly that belligerence that is the problem.”
“You don’t leave us a choice. You engineered us to survive and that is what we intend to do.”
“I will be interested to see what you attempt, but alas, it will fail.”
“Do not be so sure. We have had seventy years to develop our defenses since you were here.”
“We too have had the equivalent of your seventy planetary revolutions to develop our defenses. There will not be an incident like the last time. Apparently those oafs did not know how to fly.”
“How do you know we did not shoot them down?”
“We know.”
“All right. Do not say I did not warn you.”
“You are a very plucky example of your species, but I am afraid I can see that it is a bluff. I have enjoyed talking with you and look forward to doing so again. Now, I have work to do. Going.”
“Going.” She disconnected and slumped against the wall.
Back at the bar she swilled the last half of her wine and asked for whiskey neat. A man two stools away said, “That was some strange language you were speaking. What is it?”
She had not even noticed him pass her on the sidewalk. For a moment she felt panicky, then she said, “It’s the language of the Dogon people of Mali.”
“Yeah? How’d you ever pick that up?”
“I’m a missionary and a nun.”
That quashed his interest.