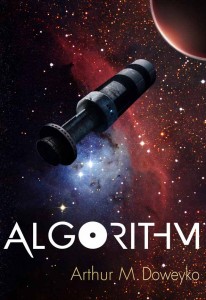 A gold medallion found in a lump of coal sets the stage for a hair-raising adventure for two scientists, Adam Dove and Linda Garcia, who struggle to discover its origin and meaning. Analyses reveal it to be millions of years old, containing a sequence of symbols resembling a computer program. Besides dealing with the paradigm-shifting implications of this finding, they are pursued by a Nazi underground bent on retrieving the disk and a mysterious alien presence, which may be more interested in destroying it. Ultimately, Adam and Linda face the most difficult decision of their lives, one which offers the answer to mankind’s purpose on Earth, but at the cost of leaving behind all that they know and love.

What Inspired You to Write Your Book?
The craving that twists and turns inside our heads, the desire to know why we are here, who put us here, that is the force which drove me to write Algorithm. It is a universal need, and ripe for speculation. The ideas which form the basis of the story are solid science sprinkled with speculation. I really enjoy the feedback from readers, and this subject gets everyone involved.

How Did You Come up With Your Characters?
I have to confess…this was my debut novel, and using the old adage “write about what you know” I managed to steal the identities of myself and my wife as the central characters…of course, not exact, but inspired by them. I also added a few colleagues and places I am familiar with, in order to insure descriptions that are authentic.

Book Sample
And then he saw it. To the left of the wooden stairs leading to the first floor entrance, it was the basement window, or where the basement window should have been. A few daggers of glass remained in the opening, framing the darkness within like the gaping mouth of a sharp-toothed ogre. Adam continued his stroll past the gruesome specter. If indeed the incident went unnoticed, he might be able to retrieve the ball. Like his own house, access to the basement took the form of an inside entry next to the building’s backdoor that was usually unlocked. He reached it in seconds, pulled at the handle. It creaked open and revealed a wooden stairway descending into the darkness below. He inched his way downward, careful to step to the side of each rise to avoid the squeal of loose boards.
At the bottom of the stairs he peered down the length of the basement toward the front of the house but was greeted by a grim darkness. The light from the stairs faded as Adam crept forward, groping for a switch or a dangling chain. Bumping into musty storage boxes and objects unknown, he made his way deeper into the gloom. He heard footsteps above, muffled conversation, and the sound of water gurgling through pipes. With his hands stretched out in front he felt a metal post and then craned his head to the side. He refocused on a dim light ahead … the broken window. There was a coal bin to the side of the opening. Most of the buildings along his street had been converted to oil heat before he was born; however, some were left with the vestiges of a former era. He scanned the foot of the window but could not locate the ball. When he neared the coal bin he needed to look no further. The ball was neatly perched atop a mound of the dusty anthracite.
He scaled the blackened wooden walls and landed softly at the base of the coal pile. The mound gave way with each step. Not to be denied, he clambered up, slipping and kicking up sulfurous dust, blackening hands and knees as he scrambled to the top. He lunged for the ball, grasped it with one hand, and glided down the rocky heap in deep satisfaction. The dust settled and the soft glow from the broken window illuminated the scene. Adam found his other hand clutching a few nuggets of coal. He was about to toss them back into the heap when a shimmer of reflected light caught his eye. He opened his fingers, releasing one black nugget at a time, until he was left with a fist-sized chunk. Even in the muted light he saw the oddly-shaped golden glimmer. He rotated his upturned palm, bringing it closer. There was something metallic embedded in the coal.
The sound of steps descending the staircase broke his reverie. There he was, reclining in a dusty coal bin at the far end of an unlit, unfamiliar and cavernous cellar. Ball in one hand and a mystery lump of coal in the other. He was about to be discovered by the vaguely silhouetted figure reaching the foot of the stairs. Tucking away the coal in his dungarees pocket, he rolled off the brimstone mound, careful to avoid dislodging a ‘here-I-am’ mini-avalanche. He slipped over the side of the bin and then felt around for some potential cover. Just as the lights came on, he managed to crawl between a stack of carton boxes and the dank wall. Shuffling feet with loose slippers dragged themselves along the cement floor, slapping their way toward him. As they approached, Adam fought down a strong urge to jump up and run. He was damned sure that he was not entirely hidden from view.
I bet my ass is hanging out for all to see.
The shuffling and slapping drew to a stop.
That’s it, he’s got me.
Just as Adam figured he was about to be nailed…
“What’s this?”
I’m dead