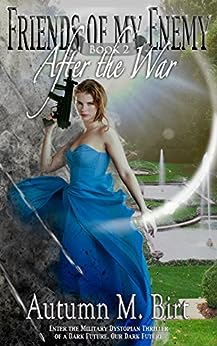 Peace is not what it seems…

How do you remove a war hero from power?

Known as the Lady Grey, her leadership won the apocalyptic war that ravaged Europe. But now in 2068 and three years into the official peace, the alliance she’s maintained with the seven ministers who rule Europe falters under the lack of an external threat. They want back the power she claimed in a bid to protect the continent; an authority they never authorized. With no war, she is no longer needed, even if she safeguards the borders from a threat that is hiding more than is dead.

But how do you plot the downfall of a popular wartime heroine – a woman who controls the armed forces? One dent at a time…

Continue the military dystopian series Friends of my Enemy with book 2, After the War. After the War can be read without reading book 1, Stories from the War, so join the near future thriller now!

Set in Europe, this series unfolds through the intersecting lives of a small handful of people. Though a fiction novel, real events such as terrorism, climate change, and manipulated politics play a role in this riveting story of romance, love, betrayal, and sacrifice made for the good of a continent.

Readers are calling After the War “a superb novel” and “Jane Austen meets World War III!”

What Inspired You to Write Your Book?
This book came to me during some lunchtime walks one May. The idea of a near future world torn apart by wars, climate change, and disease that throws recovering society of Europe into a period that feels Edwardian was too captivating. I handwrote the original version in a month – the fastest I have written anything. That story is what inspired me to start taking novel writing classes, take my writing seriously, and start epublishing. But it needed work and I waited until my skills could handle the complex storyline and strong characters. Which took until the fall of 2014. I changed the idea captured in one book into a three book series with an interconnected short story prequel. The entire series is called Friends of my Enemy and it is a near future thriller with a dystopian bent and a good dose of romance. It moves with the good and dark impulses that come with everyday decisions that are complicated by friendship, love, and betrayal. Only these choices expound to carry the fate of the world. It is hands down the favorite thing I’ve written to date and I’m really proud of it.

How Did You Come up With Your Characters?
These characters came to me. I struggled to individuate the characters in my epic fantasy series, the Rise of the Fifth Order. But when it came time to write Friends of my Enemy, not a problem. The core personality of each character was already there: Arinna with her leadership skills but torn heart that she refuses to acknowledge, Jared with his cocky attitude and dislike of authority – even though he controls the armed forces, Derrick haunted by a decision that has frozen his life, and Byran’s long held desire for someone who walked away.

What helped really give these characters flavor was writing the short story prequel to After the War entitled Stories from the War. Each character has at least one short story in their POV and each deals with the slow build of events beginning in After the War. I learned so much about why the world is such a mess when After the War begins, but also about the decisions each character makes during a tumultuous world war that echos in actions and decisions made during the rest of the books. And plus it was a lot of fun seeing the same events through the lens of a different character – not all of them react the same way! Each became a real person to me, one whose life history felt completely real as I wrote a chapter in their voice – and then had to shake off to move on to the next chapter. That was sometimes the biggest challenge!

Buy After the War: Military Dystopian Thriller On Amazon