You are here: Home / Fiction / Horror / After the Cure by Deirdre Gould @scullerytales 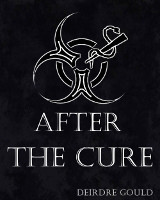 Eight years ago the December Plague swept through the human population of earth. The Infected were driven mad by the disease, becoming violent and cannibalistic, killing even those closest to them without hesitation.

Six years ago, the tiny surviving community of Immune humans found a cure, and the Infected began to wake up and realize what they’d done. And what had been done to them.

Over time, society began to rebuild itself. Now it is ready to judge those responsible for the Plague. Nella Rider, the court psychologist and Frank Courtlen a defense attorney are trying to establish the truth. But more depends on it than they know. They race to find the answers they need before the fragile remains of humanity vanish for good.

How is Writing In Your Genre Different from Others?
Horror is often denigrated as cheap thrill or viewed as appealing to the most base instincts in us. But horror has plenty to say about the actual nature of human behavior. Who we are, how we act when we are truly put to the test, above all, how we treat each other in extreme stress is all the province of horror. The genre may ask the darkest, most taboo questions of us, but it also provides some of the most uplifting answers to those questions. Many people think heroes in horror fiction are limited to showing one facet of their character: bravery. But characters in horror also usually display compassion, loyalty, and empathy in ways that characters in other genres may never get a chance to do.

What Advice Would You Give Aspiring Writers?
Don’t give up.

There are no rules, but don’t let that frighten you.

Author Bio:
A severe addiction to Post-apocalyptic literature combined with a lifetime of a very rural existence, first in central Maine and now in northern Idaho naturally led to both of Deirdre’s novels: The Jade Seed and After the Cure.

Deirdre’s education in anthropology and peace and conflict studies prompted the central idea for After the Cure: How do people live with each other after doing horrendous things to each other? How do societies put themselves together or continue to exist after terrible wars? What is day to day existence like when such violence exists within living memory? Though fiction can never come close to the reality of living with atrocity, it can help us ask important questions about our world and our treatment of each other.

Since living in the woods makes it all too easy to imagine being one of the last people left in the world, After the Cure is only the first novel of several that will take place in a post-apocalyptic, “post-zombie” world.

What Inspired You to Write Your Book?
At first, I just wondered why there were never any zombie books where the zombies (at least, the non-dead type) were cured. But as I thought about what it would look like to live in a society where zombies had been returned to their former selves, I realized that what I was really thinking about was how societies rebuilt after extreme tragedy. How do people live with each other after war, after atrocity, after genocide? How do people live with themselves and how do they live with their neighbors when they know their neighbors might be (or probably are) killers? And though I know fiction can never even approach the difficult reality of these actual situations, I thought it was important to at least ask the question in the only way that I could. And that became After the Cure,