You are here: Home / About BookGoodies / About Us

Founder of BookGoodies and Podcast Host 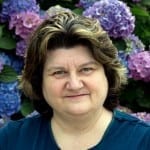 Deborah Carney is a mom of three, grandmother to one who has spent most of her life reading and researching. One of the first people on the internet before it was the world wide web, Deborah has been using cutting edge technology most of her adult life. An avid reader as a teen and young adult she aspired to write books and stories of her own, having many non-fiction stories in local papers and niche magazines. As a professional photographer it was always a goal to publish books of photographs which she is able to do with the advances in technology in book creation and printing. She is currently writing and editing her own fiction plus that of others.

Two of her son’s had Spinal Muscular Atrophy which restricted them to wheelchairs and they were unable to bear weight or stand. However their upper bodies, although weak, were functional and Daniel (the youngest) was a prolific reader and writer from a young age. BookGoodies exists because Daniel was a crusader in getting attention to younger writers and never told people about his age or disability until he had to, at which point they already loved his writing. His life was cut short by a car accident when he was 21 and I had vowed to carry on his work, both by publishing his work and attempting to get his screenplays produced. A lofty goal, but I made a promise and BookGoodies at least covers the part about getting authors young and old the exposure they deserve, no matter how their work is published.

Deborah is a “serial” entrepreneur, loving all things geeky, and always having multiple projects underway. In the past she was also a “serial” college go-er having attempted to get a degree multiple times, mostly in literature, creative writing and communication, but life always got in the way. With 96 credits she sees no need to go back just for a degree.

Her favorite authors are Natalie Goldberg, Judith Krantz, and James Herriot. Her favorite memoir is Steven Tyler’s because he really shows what goes on in a very creative person’s mind and comparing it to how Daniel’s mind worked only without the drugs.