You are here: Home / Fiction / Historical / A Woman so Bold by L.S. Young 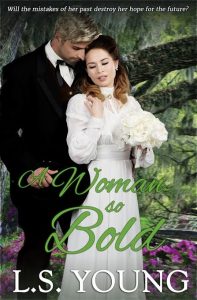 Twenty year old Landra Andrews is as brazen and unique as her first name. Decidedly out of place in her small town, she once dreamt of a life far from sweltering, sandy Florida, where she works on her father’s farm and cares for her stepmother’s many children. She thinks she has found love and freedom at last when she meets gentle and forgiving William Cavendish, a man who seems her peer in every way, but when a dark secret and a past lover intertwine to threaten their relationship, will their love, and her life, be ruined forever?

What Inspired You to Write Your Book?
The initial inspiration for my novel came to me on a windy day at age seventeen, while standing in my grandmother’s back yard, watching a storm come in. The wind was blowing white sand across this field of winter rye and I started thinking about what it would have been like to live in Florida as a woman in the 19th century. I went inside and wrote what would become the opening lines of A Woman so Bold. Like many historical writers, the past has always been more interesting to me than the present. Although I put this novel away for a long time, only resurrecting it about four years ago, it is an idea I have been preoccupied with for twelve years.

Hearing stories from my grandmother about her childhood and early womanhood on a farm in the twenties and thirties was essential to this tale as well. She told me about how her mother’s family came down to Florida from the Carolinas in a covered wagon in the late-19th century. The idea of women who were connected to the land, eking out a living in a humid, warm climate, bearing children before modern medicine, appealed to me. We don’t hear many voices from these women in literature, and I wanted to imagine one and give her a voice.

How Did You Come up With Your Characters?
My heroine from her early stages was someone with mettle and determination. I drew inspiration from Jane Eyre and Mattie Ross for her personality, and although she's nothing like Scarlett O'Hara in her behavior (they would severely dislike each other!) there's a hint of Scarlett's will to thrive in her. She is strong willed and knows her mind, and when I started writing her dialogue, she was articulate, and I knew she should be educated in spite of the backwoods setting. People in all walks of life read for leisure back then, so it didn't seem far-fetched to me that she'd be well-read, but I also decided she had been sent to a governess a few days a week with a wealthy family. Living among these high society people gave her a sense of refinement, and an elevated idea of herself she might not have had without them. Her strange name is a feminized version of a male relative's, which was much more common in the 19th century than it is now, but it adds to her sense of otherness.

Opposites attract, and my hero, Will Cavendish, is a contrast to Landra in many ways. He's a gentleman from an old Southern family who has manners but no money. I wanted him to be someone she'd be drawn to instantly, so he's educated, handsome, kind, understanding, and a bit reserved. He lacks her boldness but he is gallant. There's a bit of Ashley Wilkes in Will, and a bit of Charles Bingley too, although I think Will is more intelligent, more practical than Mr. Bingley. Will is one of those men from the past who in a different circumstance might have been an artist or a musician, but is trapped by convention.

Landra's father Solomon is based on this idea of Southern men who are gruff and full of bravado but very religious. He's hardened by the Civil War, rather arrogant, he loves to listen to himself talk, and he takes himself a bit too seriously but his daughters know he is ridiculous. He loves his children, but his stubbornness means he clashes with and punishes them, sometimes unjustly, especially Landra.

There are quite a few characters in my book. I'll just mention one more, Landra's younger sister Lily. They have one of those sibling relationships that is a close friendship as well. I based some aspects of their relationship on my own experience, but Lily herself is a bright, innocent, happy character who is meant to bring out the best in Landra, softening her edges. She reflects her kindness and sense of humor on more than one occasion.

Book Sample
Our footfalls made no noise on the carpet of fallen needles, and the wind in the branches above us whispered dryly, alive as breath. I put my head back to feel it and to take in the summer sky. The earthy scent of pine sap and the sharp, cinnamon tang of the dead needles filled my lungs as I inhaled.

“There’s nothing like a summer sky, full of summer stars,” I said.

“Except a summer girl, wearing a summer rose,” said William, referring to the wild rose I had placed in my hair for the evening. I felt his fingers brush my own, and I sidestepped away from him, laughing softly.

“Ah, Burns,” Will replied. Then he finished the second stanza:

“As fair art thou, my bonnie lass,
So deep in love am I:
And I will love thee still, my dear,
Till a’ the seas gang dry.”

“It isn’t every night we have our first kiss, either.”

My heart leapt into my throat at his words, and I turned to face him. All of my nerves had come alive at the warmth in his tone, quivering in unison like the pine needles in the breeze above us.

“I never allowed you might kiss me,” I whispered, knowing as I said it that I would let him.

I put my hand out and let him take it and draw me toward him, his fingers sliding up my wrist to my bare forearm, and then to my shoulder. I put my arms around his waist, a far more intimate gesture than we had yet attempted, and he placed his hands on my shoulders and in my hair. Then his mouth was on mine, his lips soft and tender. I let him kiss me, sighing, until I felt the hint of his tongue against my bottom lip and lit up like wildfire, leaning into him hungrily. Our tongues met, and he pressed himself against me, moving his mouth to my neck until I clung to him, gasping.

Buy A Woman so Bold On Amazon