You are here: Home / Fiction / A Study in Temperance by Ichabod Temperance 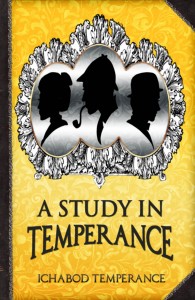 “Gee, Miss Plumtartt, after our calamitous arrival on this unsuspecting city, do you think we are still under threat of imminent murder by gangs of assorted, yet stylish, assassins?”
“I say, I do fear this to be the case, Mr. Temperance. The machinations of intrigue are not unlike one of your ingenious spring-driven contraptions,sir. Yes, plots boil and swarms of suspicious characters are at our every turn, eh hem?”
“Yes, Ma’am, Miss Plumtartt, Ma’am. It’s a good thing we have enlisted the assistance of this notorious, Victorian-era London detective to assist us in this baffling murder mystery adventure, for I fear there is more to this tale than meets the eye!”

What Inspired You to Write Your Book?
I am a life-long fan of Sherlock Holmes. As I find myself living in his era, it behooves me to enjoy an adventure with him. 🙂

How Did You Come up With Your Characters?
The Holmes in my portrayal is a conglomerate of all my favorite performances. The detectives we meet along the way are patterned after different actors that have been in his films. The many suspicious characters are based upon my friends in acting, wrestling, and music.

Buy A Study in Temperance On Amazon