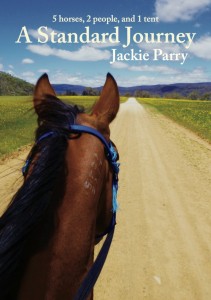 What inspired you to write your memoir?
This incredible journey opened my eyes to how tough cowboys were! It wasn’t only a journey of rescuing horses and giving them a new life, but it was about two regular people doing something extraordinary. The emotions and connections we had with our five horses was awe-inspiring – together we witnessed a miracle. The experience left me questioning my life, and where I was heading.

About your Book:
They rescued five horses from an unknown fate.

They sold everything they had.

With daring inspiration, Jackie and Noel trained the lost and confused horses, and forced their own unfit bodies to meld into one team.

Life became horses, trail, endurance, and camping: all seven reliant on one another as they trekked along part of Australia’s majestic Bicentennial National Trail.

What started as a dream adventure turned out to be more than they had ever imagined. The beauty of the trail didn’t lessen its dangers; with minimal support and all their worldly possessions on horseback, Jackie and Noel made mistakes and with humour learned the hard way.

They were amateur horse-handlers, tackling an epic challenge, but they created something special, unique, and incredibly endearing.

Fears were faced, healed, and conquered. Bonds were forged.

But did the team of seven that started together, finish together?

Saddle up and take a ride along life’s natural trail of trauma, fear, pain, and loyalty.

How did you decide how to publish your book and where is it published through:
My first two books have been a great success. Of Foreign Build – From Corporate Girl to Sea-Gypsy Woman became a No.1 bestseller and still continues to sell well.

I choose to self-publish as I have complete control – for example, 50% of all profits from A Standard Journey is donated to horse charities.

How do you see writing a Memoir as different from writing other genres of books?
The searing honesty, and the intense emotions.
I have my book hundreds of times and it still makes me cry now – mostly happy tears!

Author Bio:
Originally from the UK, Jackie is now an adopted Australian. She grew up with horses in the UK until her world was shattered with a heart-breaking bereavement. Disillusioned with life she ran away to Australia and met and married Noel. They decided to buy a boat and set sail. So within her first year of living in a foreign land, she was getting used to a foreign husband, and a foreign life on board!
Mariah II took Jackie & Noel around the world. Pyewacket II (purchased in San Francisco) took them across the Pacific Ocean for a second time on a more southerly route. Adventures include The Great Loop in the USA plus Canada’s Great Lakes and the French Canals.
As a commercial skipper Jackie has worked internationally on boats, and has been a Marine Rescue skipper. She has also taught commercial maritime. She co-wrote a pilot book (in America) and several hundred magazine articles worldwide. Cruisers’ AA (accumulated acumen) was Jackie (and Noel’s) first self-published book.
Of Foreign Build – From Corporate Girl to Sea-Gypsy woman published last year and quickly became a best-seller.
Currently Jackie is exploring the French canals on a Dutch barge with her Australian husband.