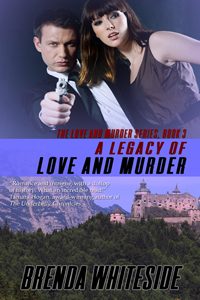 In Austria to meet her great-grandfather and explore his castle estate filled with priceless art, August Myer arrives to find he’s died suspiciously. As one of the heirs, her life is in danger, turning this fairytale Alpine adventure into a nightmare of veiled threats, unexplained accidents, and murder.

Inspector Tobias Wolf splits his time between his profession and fighting the spread of neo-Nazism. But when the beautiful, intriguing American crosses his path during a murder investigation, ensuring her safety challenges his priorities…and his heart.

When August learns the handsome inspector is concealing a personal involvement and the death of her great-grandfather is somehow connected, she takes the investigation into her own hands. The outcome could be the death of both of them.

What Inspired You to Write Your Book?
This is the middle book in a planned five book series and completes the search for her past that Lacy began in book one. In book one we learn Lacy is half American Indian and half Austrian. So, we had to travel to Austria to complete her search, although the heroine in this third book is her daughter August. I chose Austria because I've traveled there, have a close Austrian friend in country, and I love Austria.

How Did You Come up With Your Characters?
My heroine appeared in book one of the series. August had a brief walk-on part as the daughter of Lacy Dahl, the heroine in book one. When deciding how to wrap up the search for Lacy's biological parents, August was the logical choice for the heroine in A Legacy of Love and Murder. Inspector Wolf was born out of a need for an Austrian hero…after all we are dealing with murder. When I learned there is an undercurrent of Neo-Nazism in Austrian, my villains materialized.

Book Sample
Unreasonable irritation set his jaw tight, and he shot his partner a scowl. “She’s lying.”
“She’s convincing.” True to form, Albert spoke his mind. He’d miss him when he retired.
He let his ire go with the thought. “You don’t know her well enough.” They’d reached the landing and the door into the Great Hall.
“How well do you know Eike, Tobias?”
“I know her enough to know she’s not to be trusted. To know her aspirations—”
“I trust your gut.” His partner laid a hand on his shoulder. “It felt practiced…you’re right.” Albert opened the Great Hall door. “Let’s see if we can get the nephew to tell us something more.”
Tobias led the way, glanced along the table and into the shadows at each end, then made his way around and into the main room. He jerked to a halt. “Who the hell?” He trotted to a prone figure, face down in the middle of the hall.
Albert, huffing, drew up beside him as he squatted to get a closer look.
“It’s Bauer.” Tobias put fingertips to Bauer’s neck, but the pulse wasn’t there. His hand grazed a red silk scarf. The scarf, a faint scent, and confusion washed over him. August. She’d worn a red scarf the first time he’d seen her.
“He’s dead?”
“Very.”