You are here: Home / Fiction / Romance / A Lady in Name by Elizabeth Bailey 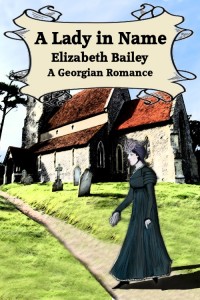 On discovering she is the illegitimate daughter of a peer of the realm, Lucy Graydene, bereft and grieving, sets out to confront Lord Pennington with the result of his misdeeds. She finds instead his autocratic heir, Stefan Ankerville, and is dragged willy-nilly into the new earl’s unconventional family. Lucy is driven to battle for her independence while she struggles against the venom of the half-sister she never knew she had.

When the secrets of Lucy’s past begin to unravel, she is reluctantly obliged to rely on Stefan’s help. Can Lucy overcome a dangerous attraction to the earl, with whom an alliance is impossible? Or is there a faint hope of happiness in the hidden truth of her origins?

What Inspired You to Write Your Book?
I was watching a program on TV about illegitimate children and I suddenly thought – love child! Immediately the idea transferred to the Georgian and Regency era and I was hooked on the possibilities. What if a girl found out her father was not her father and that she had been born out of wedlock. In those days, this was a terrible situation for a female, and I just wanted to explore what would happen in these circumstances. Of course it’s a romance, so naturally we are hoping it all turns out for the best!

How Did You Come up With Your Characters?
Lucy came to me fully formed, but Stefan took time to show me who he was. It suddenly became clear that there was a streak of oddness about him, and his eccentric mother popped into view. An unconventional family opened up the options because with Lucy in a state of despair, we needed something to lift the mood, and this did it. I’m rather fond of Corisande, Stefan and Dion’s mother, a true bluestocking and completely inadequate as a parent. Dion was fun too, since she’s been brought up without much attention to ladylike conduct. And then there’s the nasty cousin, who probably has a good excuse for being quite horrible to Lucy, though it doesn’t make it any more acceptable.

I love creating the minor characters in my stories and filling the pages with interesting personalities.

Book Sample
At a guess, her obvious bereavement was recent, a notion borne out by the pale cast of her cheek, strain about the dark eyes and a certain gaunt look about her willowy form. Stefan was struck by an indefinable air that hung about her—of tragedy. Or was that fanciful?
By her communication, he had known Miss Graydene was unaware of his uncle’s decease, and had taken grim satisfaction in her first inevitable confusion. A moment’s scrutiny had reassured Stefan as to her condition in life, and her attitude—scarcely conciliatory—argued against his initial expectation. Nevertheless, if Miss Graydene supposed he was a man to be easily bled, she had something to learn of him.
‘Your letter was explicit,’ he said, keeping his tone carefully controlled. ‘You claim to have been fathered by Lord Pennington, and you expect—’
‘Hope,’ she cut in, a flash in her eye. ‘I hope. I do not expect.’
‘Very well then, you hope he may be induced to visit you here for a purpose which you cannot set down in writing. Have I that right?’
From the defiance in her stare, it was evident the ironic inflection was not lost on the girl. Stefan was conscious of a flicker of admiration.
‘Sufficiently, sir.’
‘I realise your letter cannot have been intended to my address,’ he continued smoothly.
‘Obviously.’
He was nettled. ‘This hostility of yours is scarcely politic in the circumstances, Miss Graydene.’
Her cheeks grew taut, indignation bringing a shine at the dark of her eyes. ‘Do you take me for a beggar, my lord? Who has been wronged here? Your predecessor—for such I assume the villain to have been—is at fault, not I. I did not frame my request to you, but to him. If you are his son—’
‘I have not that distinction, I thank God,’ he broke in, revolted at the thought. ‘He was my uncle, not my father.’
The information did not appear to afford Miss Graydene the slightest satisfaction. Her slight bosom rose and fell sharply.
‘Whatever he was, sir, his existence is anathema to me. I would to heaven you had been he, for there is a great deal I could say to him were he before me now—and none of it complimentary.’