You are here: Home / Fiction / Romance / A Game of Chance by Lauren Linwood 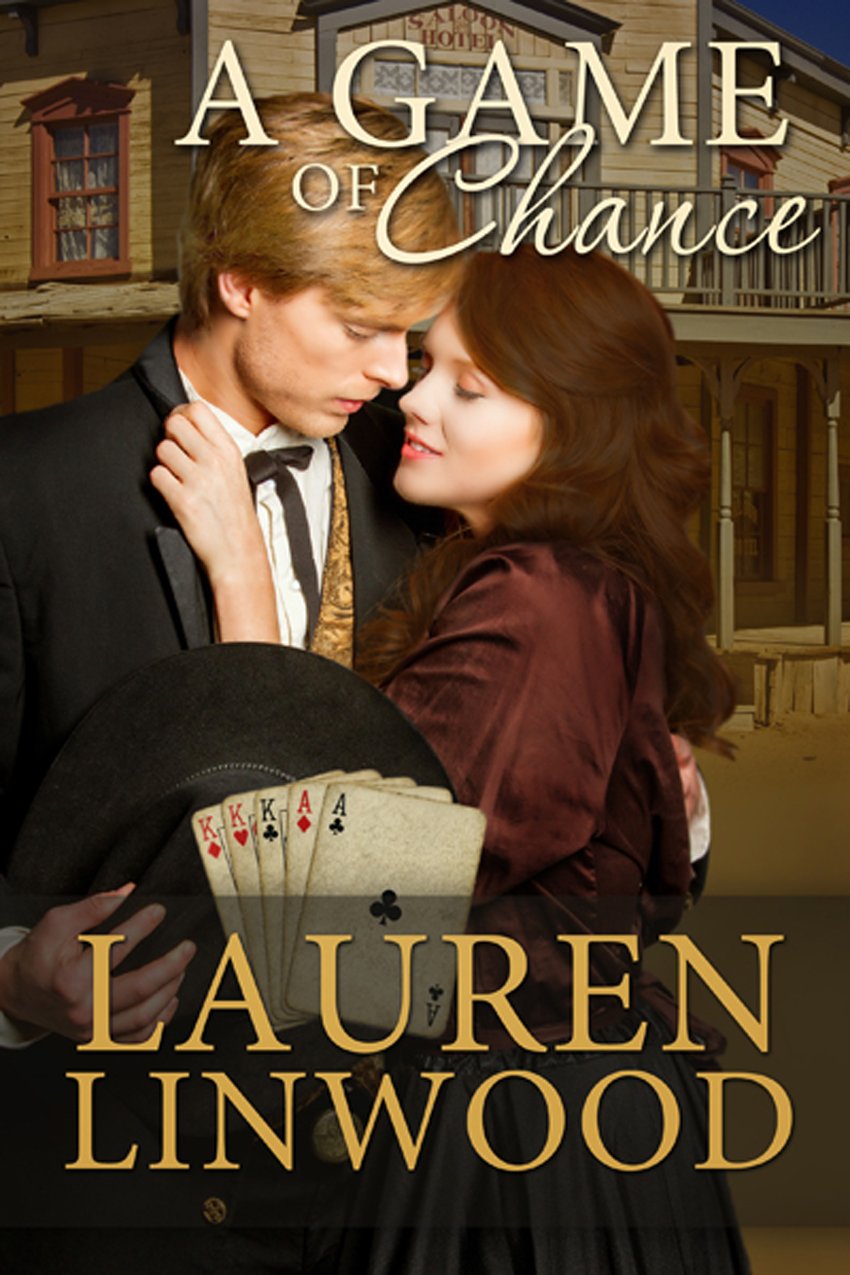 Gambler Jed Stone journeys to California to track down Simon Morgan, the man responsible for his best friend’s death. Arrested for robbery and murder upon arrival, Jed is shocked to see his face on a wanted poster. He escapes before his hanging, unaware that the man guilty of those crimes is the twin brother he never knew existed. In a case of mistaken identity, Jed acquires the most famous whorehouse in San Francisco in a rigged card game his twin is meant to win.

Lily Frontiere takes over running Lucky Lil’s from her dying mother, the house madam who shielded her by sending her away to boarding school. Lily’s intelligence and astonishing resemblance to her mother help in her charade, but she’s entered a world she knows little about. She clashes with the handsome stranger who turns up with the deed to Lucky Lil’s in hand, yet she is attracted to the charming risk taker.

But Simon Morgan seeks both Lily’s hand and ownership of Lucky Lil’s—and he will go to any means to possess both. Will Jed foil his nemesis while bringing his outlaw brother to justice and win Lily’s love?

What Inspired You to Write Your Book?
I’d always heard that phrase “twins separated at birth.” I decided to take the words literally, so A GAME OF CHANCE starts with a woman giving birth to a son. The baby is taken from her and, minutes later, she gives birth to another boy and dies. The two men grow up very differently, not knowing about one another, until their lives collide in San Francisco twenty-five years later.

How Did You Come up With Your Characters?
My hero Jed is a charming rogue who has just a touch of my husband in him. My heroine Lily is smart, a little rebellious, and a talented actress. I come up with the name, and the characters just start speaking to me!

Book Sample
Gordon took out his money clip. He placed a few bills on the bed, soaked in her sweat and water and blood.
“That’s enough to satisfy the midwife. Sorry I don’t have enough for your funeral, love.”
Cara Lee bit back the scream and held it in her throat. The contraction ended. She refused to give him another reason to belittle her.

The midwife came to the bed and lifted the covers. “The head! My God, the baby’s coming out. Push, missus, push. Push for your life!”

Cara Lee gritted her teeth and bore down hard. A great relief washed over her. She closed her eyes, unwilling to see the man who had meant everything to her and who now betrayed her in her greatest hour of need.
“There, little one, there you go.”

She heard a slap and a hearty cry. She opened her eyes and saw her baby. Love burst from her.

“It’s a boy, missus. Hale and hearty. Even got a nice head of hair on him.”

“He’s mine,” she spit out, glaring at Gordon Fisher. “You can’t take him.”

“Oh, I can and I will, dear girl. This child is the meal ticket to my trust fund.”

He took the baby, now clean and wrapped in his mother’s ivory shawl, and spoke in low tones to the midwife before turning back to her. “This child will prove I’m respectable. I thank you for all you did, my dear.”

Gordon retreated from the room. She let out an anguished cry.

Cara Lee moaned as the woman fussed over her, having trouble breathing again. A great weight pressed upon her.

“The worst is over, missus. Let me deal with the afterbirth. Maybe I can staunch the bleeding.”

As the midwife lifted the sheet again, she gasped. “Oh, no. Oh, my lord.”

Cara Lee broke out in a cold sweat. The pain was back again, this time even worse. Her body, her spirit, her faith in her husband. All had been broken. How much more could she bear?

The woman clucked loudly. “Another one’s coming, child. You’ll have to be strong a little bit longer.”

She sat up again. The burning urge to push had returned, stronger than the first time. She bit her lip hard and willed the baby to exit the birth canal. The burden eased from her, and the midwife cut the cord as before.
“It’s another boy. Spittin’ image of the other tyke.”

A wet cloth glided across her forehead. What I wouldn’t give for a sip of cool water.

A few minutes later the midwife pulled the stained bed sheet over the woman’s head. She stared blankly at the wide-eyed baby in her arms.

“Lord Almighty. I never even knew your mama’s name.”

About the Author:
Lauren Linwood became a teacher who wrote on the side to maintain her sanity in a sea of teenage hormones. Her romances use history as a backdrop to place her characters in extraordinary circumstances, where their intense desire and yearning for one another grow into the deep, tender, treasured gift of love.

Lauren, a native Texan, lives in a Dallas suburb with her family. An avid reader, moviegoer, and sports fan, she manages stress by alternating yoga with five mile walks. She is thinking about starting a support group for Pinterest and House Hunters addicts.