You are here: Home / Fiction / Romance / A Fragile Mask by Elizabeth Bailey @lizbwrites 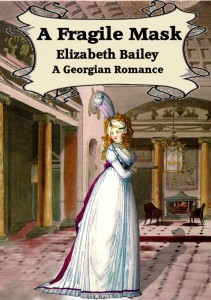 Visiting friends in Tunbridge Wells, Denzell Hawkeridge is struck by the warmth of a beautiful girl playing with children in the snow. But when he meets the mysterious Verena Chaceley, she is as cold as a statue. Provoked into flirting, Denzell cannot judge his success in pricking through the mask.

Anxious for her abused mother’s health, terrified the perpetrator will come after them, Verena struggles to remain aloof from Denzell’s charm. He retires defeated, until a chance encounter produces a clue to Verena’s true background.

Will Denzell’s affection be enough to coax Verena out of her ingrained fear of matrimony?

What Inspired You to Write Your Book?
I lived in Tunbridge Wells for a while, and this is the second book I wrote based there. I love the idea of this spa town, well past its heyday, but still frequented by older fashionables, and just the place for refugees to hide themselves away.

How Did You Come up With Your Characters?
Denzell was easy. A young fashionable flirtatious man-about-town. Verena was another matter. She is a complex mixture and her obsession with her mother’s poignant background makes her a prickly and difficult subject. I enjoyed the process of having Denzell’s warmth gradually melt her ice.

Book Sample
He could scarcely believe the evidence of his own eyes. Had he not seen it for himself, he would never have imagined that a face could alter so radically. But a moment ago, there was a world of distress reflected there. Now one would have sworn that there could be not a ripple of emotion that would disturb these placid features.

‘How do you do, Mr Hawkeridge?’

Not a tremor. Not the faintest quiver in the calm voice with which she responded.

‘You are about early, Miss Chaceley,’ he pursued.

‘So also are you, Mr Hawkeridge,’ she returned, her tone pleasant.

Denzell felt disorientated. How could she do that? Switch in an instant from that rigid pose, a look in her face that was almost—yes, tragic. There was not the least suggestion in her of the storm that must have been in her mind. He had seen it. He could not have imagined it—could he? Moved to test her out, he smiled.

‘I confess I had no notion that my luck had changed so radically.’

Did he detect vagueness in her tone? Perhaps she had not heard what he had said.

It was not a question, but a statement. And he thought a shadow crossed the still features.

‘Yes, Miss Chaceley. I was too unsure of my welcome to risk a rebuff by approaching you. In any event, there was no getting near you in the Rooms, you know.’

She was not taking it in. Where was the nicely calculated response to depress his pretensions? Oh, she had every outward semblance of normality, but he would swear to it that her mind was elsewhere as she glanced up at the sky.

‘It appears the sun may be breaking through.’ Her gaze came back to him, and there was once again that faint trace of a disinterested smile on her lips. ‘If you will excuse me, Mr Hawkeridge, I will resume my walk.’

‘By all means,’ he agreed, stepping to one side, and leaning on the cane he carried. He had to let her go, although everything in him urged him to hold her there, that he might probe this mystery to its depths.

Yet how in the world was he to effect any sort of communication with her? Was she truly so contained, so much mistress of herself? He allowed her to pass on, and watched her walk away, her quickened pace perhaps the only sign of agitation visible.

Shaking his head in wonder, Denzell turned his steps towards the Ruishton home, all his ideas about Miss Chaceley turned upon their heads. He had been persuading himself otherwise—or trying to—but in reality he had begun to think her dull, even soulless as he had said to Osmond. But here was a change indeed. Who could have looked upon that face unmoved? Who could have watched those unseeing eyes, reflecting all unaware the distraught message of her heart, and not been conscious of a rush of sympathy?

About the Author:
Elizabeth Bailey grew up in Africa with unconventional parents, where she loved reading and drama. On returning to England, she developed her career in acting, theatre directing and finally writing. Elizabeth has 18 novels published by Harlequin Mills & Boon and recently began a Georgian historical crime series of which the first two books, THE GILDED SHROUD and THE DEATHLY PORTENT, were published by Berkley Books (Penguin US). But since she still loves romance, Elizabeth is delighted with the opportunity to publish her historicals herself.