You are here: Home / Fiction / Paranormal / A Familiar Problem by Sharon Karaa 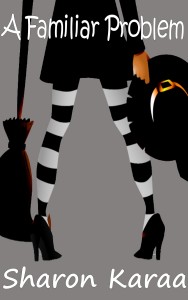 Let me give you a word of advice, be careful what you wish for. Trust me, I’m a demon, I know these things.

So how did I end up being a familiar? It wasn’t easy, I can tell you! Making it snow in Hell was just the start of it. And where did it get me? Earth, that’s where, and I’ll tell you now, compared to Hell, it’s…well, hellish!

Saved by a posse of witches, I made myself a new home, with friends (yes, believe it or not, demons can have friends!), but would my new life be enough for me or was there more I was missing? Life on earth seemed to be pretty damn boring at times.

Then along came two of the sexiest males a girl could ever dream of. The problem? One was an angel and the other was a demon.

Life was just about to get complicated.

What Inspired You to Write Your Book?
The realisation that good people do bad things and vice versa. I wrote about a bad angel and a good demon 🙂

How Did You Come up With Your Characters?
I didn’t, they came up with me.

Book Sample
“We must go to the hall, I want to thank the priest personally. I’ve never been to a service before and I have to say it has been a revelation” I said, tapping him on his arm. The look of relief vanished from his eyes.

“Ok, no problem” he said, getting to his feet and waiting patiently for the geriatrics to file out.

We followed the throng to the hall where steaming vats of tea stood on a table near the windows at the front of the room. They were already being put to good use.

As the room filled up around us, I pulled the slightly damp handkerchief out from my sleeve, pulling Zerachiel to me by his tie, and before he could protest, rammed it up against his nose.

“Blow!” I said, sternly and he looked down, horrified. Yes, it was the same hanky I’d used to wipe the sick off myself earlier and I could see the realisation dawn on his face as he pulled back sharply.

“Now don’t be a baby, you need to blow your nose!” I said, making to put the offending piece of cloth back on his face. He grabbed my arm to stop me.

“Some people have no manners!” grumbled an old woman, as she passed us, giving Zerachiel a filthy look. I smiled at her gratefully and shoved the hanky back up my sleeve.

“Would you like a cup of tea?” I asked, not waiting for his answer and marching over to the queue forming orderly in front of the table.

I poured two cups and made my way back to him just as he was about to shove a wedge of Victoria sponge in his mouth.

“Zerachiel!” I snapped, sharply and he looked at me, confused.

“That is not good for you, you really shouldn’t be eating it!” I said, pushing a cup of tea towards him.

“Natalia, I’m in heaven, I can eat whatever I like without putting weight on!” he smiled, his eyes twinkling.

“This isn’t about the weight, or the fact that it’s unhealthy!” I said, exasperated. “This is about treating your body like a temple of God! I’m pretty sure He wouldn’t appreciate you indulging in rubbish!” I glared at him.

He pursed his lips and stood the cake back on the plate, taking the tea I offered him from my hand.
I took my own teacup in my fingers and delicately raised it to my lips, looking at him through lowered lids. He looked at the cake in his hand longingly then turned and set it down on a nearby table, consoling himself by taking a sip of his tea.

“I see we have newcomers in our congregation!” I turned to see the priest standing before me, a smile of welcome on his ruddy face. Someone had definitely been at the sacramental wine a little more than was good for him. “I’m Reverend Father Michael Bolton, and no, I can’t sing!” he tittered.
Yes, hilarious, I thought.

“Very pleased to meet you, Reverend Father, I’m a demon and this is Zerachiel, an angel who is trying to get in my knickers”. I shoved my hand forward as Zerachiel choked on his tea. The reverend stared at me dumbfounded but automatically took my hand to shake it.

“I have to say, I thoroughly enjoyed your sermon. It was my first time. A church virgin, if you will. Can I ask, are you married?” I tilted my head to the side and observed him, a serious expression on my face.

The reverend father pulled his hands out of mine as though it was covered in horse shit, which, in a way, it was. I’d sat listening to his sermon on how to be a Stepford wife for the better part of three hours. I was drowning in the stuff.

“We don’t marry in the Catholic Church, we take a vow of celibacy!” he replied, looking at me confused.

“Oh! So, you’ve never been intimate with a woman! Wow, now that makes sense!” I laughed, relieved as Zerachiel grabbed me roughly by the arm.

“Reverend Father, thank you so much for sharing your wisdom with us today.” He said, dropping his cup on the table next to his cake and pushing me quickly towards the exit, his fingers pinching into my arm. Tea sloshed over the side of my cup as I dug my heels in, trying to slow him down.

“Wait, I need to finish my tea!” I giggled inside as he took the cup from my hands and passed it to an old lady standing innocently at the door.

He pushed me through the door and out in to the sunshine, continuing on until we were well clear of the church.

“Well that was a little rude, don’t you think?” he said, turning on me and glaring furiously.

“Absolutely! I was in the middle of a conversation with that nice man! What on earth has gotten in to you!” I put my hands on my hips and raised my chin, defiantly.

He exploded. “Are you crazy? You can’t go saying things like that to a man of the cloth!”
“What? Did I lie?” I asked, not giving him an inch.

“That’s beside the point!” he stamped his foot in frustration, clenching his hands into fists and looking up at the sky.

“No it’s not! I’m in heaven, I am trying to abide by your rules! No lying is in there somewhere, I’m sure of it!”

About the Author:
Sharon Karaa is a mass of contradictions but two facets of her character have always battled for supremacy; her logical self (let’s call him Frank) and her artistic side (lets her call Misty).

Until recently, Frank won every battle, forcing Sharon into a life based on most probable outcome and, to give him his credit, it has led to a fairly comfortable if rather boring life so far.

Then Misty took up kick boxing and gave Frank a good kick in the goodies.

Sharon lives with her husband in a little village north of Newcastle upon Tyne, England. She doesn’t have a cat.