You are here: Home / Fiction / Action & Adventure / A Desperate Escape to Paradise by Peter G Nogel 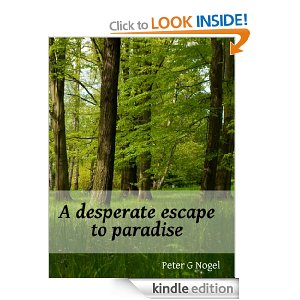 The mysteries of Alicia’s history only begin to deepen as she and her Grandmother spend an afternoon sorting through old photo albums. Alicia has always sensed a deep sadness in her grandmother, and assumed it was over the loss of her husband. Alicia had never had the opportunity to meet her Grandfather, but she knew from the way her grandmother smiled when she thought about him that he meant quite a lot to her. Alicia had never really thought about what he might be like, in fact she never thought about much other than her friends, cheer leading, and the occasional cute football player. She did her best in school, but she had no desire to pursue any certain subject.

When her grandmother closes the photo album before Alicia has the chance to see the last page, she knows that she is trying to hide something from her. Normally she would let it go, but she cannot ignore her curiosity. When she opens the photo album to the last page and discovers a newspaper clipping about her grandfather’s death, she discovers for the first time that there is a family secret. Her grandfather had not passed away because of illness, but had been murdered. When her grandmother catches her looking at the clipping she insists that Alicia not look any more into it. Alicia finds it incredibly difficult not to ask more questions, but she can see from the pain in her grandmother’s eyes that it is too difficult for her to talk about. As exhausted as Alicia is, she decides to let it rest.

To make matters even more exhausting Alicia finally receives her history assignment. Not only is it a research paper that involves interviewing her oldest living relative, she has to do it with a boy whose name she does not even know. She knows her grandmother will not be very willing to answer questions after she had made it clear that Alicia was not to look further into her past, however she cannot afford to get a zero on her assignment either. The boy she is paired with is about as interested in her as she is in him and offers nothing but a cold shoulder when she awkwardly asks him his name. He refuses to tell her and insists that they work on their assignments separately. Alicia is too tired to protest. She is too tired to put on a smiling face for her friends, or to even beg out of her cheer leading practice. All she can think about is sleeping. She can only hope that when she finally does get some rest she won’t have Matthias’ angry face waiting for her.

Hi my name is Peter and I am the author of several books, all short stories and all fiction, it is my aim to get you to transport into the world of the fictional story and be part of it, to hate their enemies and to befriend the characters. If I can, I like to make each book grip you and keep you glued to the chair your sitting on as you read. Yes I have a sense of humour that my mother always said would get me into trouble one day, bless her.

As my children were growing up I always liked to tell them stories at night when it was bed time – they would sing out dad tell us a story and mother would roll her eyes and head back to the kitchen for she new that the stories would have them gripping their knees hanging on every word then hearing them plead for more as I switched off the bedroom light hardly sleeping stories but that is me and my way.

My children have all grown up now and while I am still waiting on grandchildren hopefully (my kids would roll their eyes every time I ask when they were coming) I needed to tell my stories to someone and so I became the author my children had always known.

I really enjoy writing and as I now sit in the garden with my laptop in France I can hear the birds singing their songs and mother inside humming as she cooks up enough food to feed an army (I think she still cooks for all of the kids!). Our move from the UK to France was one I had dreamed of for years then suddenly we decided it was time and we pulled up sticks and well here we are enjoying sunshine!