You are here: Home / Fiction / Action & Adventure / A Dangerous Harbor 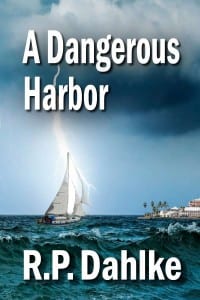 Bleary-eyed and sleep deprived after a long overnighter into Mexico, solo sailor and SFPD police detective, Katrina Hunter, thinks the mermaid twenty yards behind her thirty-two foot Westsail is nothing more than a sailor’s hallucination But everything she knows about floaters convinces her to turn her boat around for another look.
Now, alone and isolated in the Mexican port’s police station for six hours she’s convinced that reporting the body of a floater to authorities was a mistake. Even the arrival of a handsome, if somewhat dour, Mexican/Italian investigator does nothing to dispel her growing anxiety that she’s about to be charged with the murder.
Chief Inspector, Raul Vignaroli, is as surprised by the attractive solo-sailor as he is to find that she’s a respected member of the San Francisco police force, and after some well-placed phone calls he’s sure that he’s found the perfect partner to help him solve a murder, if not the cure for his broken heart.
Released, she’s free to go. But leaving the police station hits a snag when two policemen march in, dragging a listless prisoner between them. But before Katy can dodge them for the exit, the prisoner raises his head and a startling pair of aquamarine eyes meet hers. He straightens his back, wincing at the angle of his cuffed wrists. “What the… Whisper?”
Suddenly, the sound of the ceiling fan is terribly loud. Blood pounds in her ears, her mouth goes dry, her palms are damp and her feet are nailed to the floor. In a knee jerk reaction, she hisses, “Don’t call me that!”

Author Bio:
This book was the result of several years in Ensenada, Mexico aboard our cutter rigged Hylas 47 sailboat. Ensenada is, as most California sailors know, first port of call into Baja, Mx after San Diego. Most of the town is clustered around the harbor where working marinas like Baja Naval still service American boaters.
I found this sleepy little town to be fascinating, full of endless stories, with a culture that was, and still is, struggling to gain a foothold in the 21st Century. The irony is that I started this book ten years ago, based on a local news story, which at the time was staggering in its brutality. This story is no longer unique as the Mexican Cartels daily murder with impunity. But, just as the cartels are not all that is Mexico, this story isn’t all about them, it’s about what happens when you try to run away from your problems and it’s about Americans, the ones passing through and the ones stuck in A Dangerous Harbor.