You are here: Home / Fiction / A Certain Someone by Ali O’Donovan 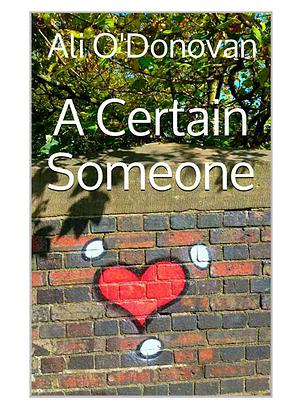 Ex teacher Annie is on a serious downward spiral after losing her college sweetheart, her job and possibly her luggage. But despite running away to the wilds of West Kerry to mend her broken heart, she soon finds herself entangled with two very different Mr. Wrongs. Mart a washed up soap star falls off his barstool into her arms. While Scott a hip American photographer keeps catching her in embarrassing situations and becomes the nemesis she loves to hate. But it is the arrival of Philo a former college “frenemy” now remade as a social climbing glamazon and married to one of Ireland’s richest men that really forces Annie to face some home truths and sort out who really is that “certain someone”.

“A Certain Someone” is a sharply observed romantic comedy featuring a bruised heroine trying to find love beyond the clichés of hearts and flowers.

What Inspired You to Write Your Book?
The beautiful landscape of Kerry and a photograph of a young primary school teacher in a local magazine. She looked so full of life I wondered what had brought her to this place. The story soon veered off in another direction. But the beautiful searching light of Kerry was a major inspiration.

How Did You Come up With Your Characters?
For Annie, the initial inspiration was a photograph. Then it was a matter of giving her a back story. She was running away from a broken heart, she was going to see her best friend. I thought about some of the colourful local characters I’d met in Kerry and Ireland.. And I put them all together!

Book Sample
“Just a bit of turbulence, as we head in towards Kerry,” said the pilot in a chummy, slightly bored burble that was the speech equivalent of musak. It was meant to lull the passengers into a state of inert calm, but it did nothing to reassure Annie who was a nervous flyer trying hard not to be a nervous wreck.
She had really thought she was going to be all right this time. She’d kept her cool at the check in desk even though she had to duck to avoid being beheaded by a surfboard wielded by a moron without a backward glance. She’d even joked affably with the Security Officer as she went through departures. When he’d asked her if she was carrying anything sharp, she had replied, “only my tongue”. Okay, it was hardly Oscar Wilde but it wasn’t bad for someone who felt a vomity surge every time she saw a paper airplane. For someone whose whole life was in free-fall and who hadn’t uttered a proper sentence, never mind a lame witticism for several weeks.
Now she shrank into her seat and took one last look out the window as she wiped her sweating palms on her lap. Soon the patchwork of vivid green fields would embrace her like a shroud and she would die a cast off, loveless, spinster with a withered womb. She felt her mouth grow dry and the thrombosis blood clots congeal in her legs despite the knee-high flight socks from Marks and Spencer. She was wedged in the middle between the two biggest men on the plane, or maybe the universe. To her left, her surfer nemesis, a Man Mountain slumped against the window seat, holey woolly hat pulled over his head like a balaclava, snoring gently and no doubt dreaming of some bitchin’ curl or curly-haired bitch in Bora Bora. He hadn’t even stirred when she got in beside him and dinged him with her bag in lo-fi revenge. Maybe he was dead. He smelt like he might be – of woodsmoke, sea salt and sex on the beach. To her right was Mr. “Enormarse” a large sweating man with dandruff who she’d noticed in departures and knew there and then destiny would seat them together.

Buy A Certain Someone On Amazon