You are here: Home / Fiction / Mystery/Suspense / A Broken Keeper by G.H. Ward 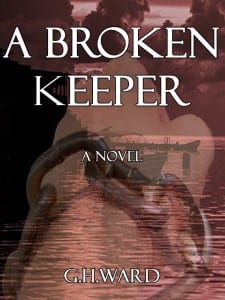 A young, debt-laden college graduate Calvin Keeper is struggling to land his ‘dream job’ in Manhattan. Unfair setbacks and emotional discouragement plague him. The chains of consumer debts and crippling student loans restrict his freedom, pushing him toward a personal financial crisis and psychological meltdown. He sullenly ignores the outer world around him as he tries to attain his job goal. He turns to old school friends and his Gulf War vet cousin Scooter for help in his desperate situation… only to position himself on an improbable head-on collision course with the same outer world he has tried to shut out. He finds himself accidentally connected to a high profile murder-suicide involving an ex-congressman’s son and a tragic house fire in South America.

What Advice Would You Give Aspiring Writers?
Always write about a subject that you have a passion for. The challenges of starting and completing the work will be a lot easier to bear. You can always experiment with other themes later on… when you have established yourself as an writer!

Author Bio:
G.H. Ward is the author of A BROKEN KEEPER, a self-published debut novel that was published in June, 2013. It was the fulfillment of a lifelong dream.

G.H. Ward was born in Nassau, The Bahamas, where he attained his primary and secondary education. He completed his bachelors and masters degrees in New Jersey, USA and worked there for a number of years before returning to his home town of Nassau. G.H. Ward now strives to rekindle his dormant passion for writing, namely storytelling. He is also a FAA licensed Private Pilot.

His hobbies include reading, traveling, painting and singing. He is an avid fan of the Microsoft Flight Simulator program.

What Inspired You to Write Your Book?
I was inspired to write the book by my life experiences… both good and negative. I also had a personal interest in the subject matter that dominates the book, namely:
-Human Smuggling
-International Politics
-Race Relations

Lastly, I have a keen interest in airplanes 🙂