You are here: Home / Fiction / Romance / The House on Burra Burra Lane by Jennie Jones 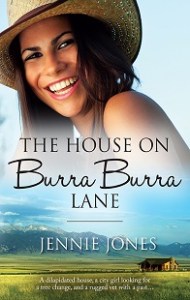 A dilapidated house, a city girl looking for a tree change, and a rugged vet with a past. Just another day in rural Australia…
Just ten days after her fresh start in the isolated Snowy Mountains, Samantha Walker trips over a three hundred pound pig and lands in the arms of Dr. Ethan Granger — and the firing line for gossip. It was hardly a ‘date’ but sparks of the sensual kind are difficult to smother in a community of only 87 people. Now there’s a bet running on how long she’ll stay and what she’ll get up to while she’s in town.
Ethan has his own issues — Sammy’s presence in his childhood home brings with it painful recollections of family scandals and a bad‐boy youth. When the gossip around them heightens, his life is suddenly a deck of cards spread on the table for all to see. Then Sammy’s past catches up with her…and it looks like all bets are off.

What Inspired You to Write Your Book?
I wanted to write a romance with adventures of the heart and a little humour on the side. I chose the Snowy Mountains in Australia and created my fictional town of Swallow’s Fall. Only 87 residents, all interfering in the lives of my hero and my heroine.

How Did You Come up With Your Characters?
A scene popped into my head with a woman, her cat, and a pig. I added a vet. It grew from there!

About the Author:
Born and brought up in Wales, Jennie Jones loved anything with a romantic element from an early age. At eighteen, she went to drama school in London then spent a number of years performing in British theatres, becoming someone else two hours, eight performances a week.
Jennie wrote her first romance story at the age of twenty five while ‘resting’ (a theatrical term for ‘out of work’). She wrote a western. But nobody wanted it. Before she got discouraged a musical theatre job came up and Jennie put writing to one side.
She now lives in Western Australia, a five minute walk to the beach that she loves to look at but hardly ever goes to – too much sand.
Jennie returned to writing four years ago. She says writing keeps her artistic nature dancing and her imagination bubbling. Like acting, she can’t envisage a day when it will ever get boring.