You are here: Home / Fiction / Fantasy / Pickles and Ponies: a Fairy-tale by Laura May 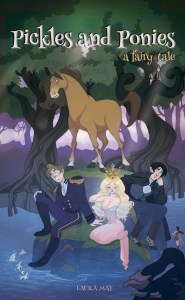 A humorous fairy-tale for adults and young adults alike.

Thanks to a curse, Prince Vanya was born with a silent heart. Luckily, he has his talking horse (conveniently named ‘Horse’) to help—and he’ll need it. The prince is on a quest to save Melodia, Princess of Rather Fishlike Things, who’s suffering from a certain amount of brainwashing. On his way he’ll encounter friends and foes, most of them with attitude. Meanwhile, Melodia keeps stumbling into adventures of her own.

Will the prince manage to rescue the princess? Will he break free from his curse? And most importantly, will there be a happily ever after?

What Inspired You to Write Your Book?
I spent a year living and working in Russia, and in learning Russian, spent a lot of time reading fairy-tales. These usually had pictures, so if I couldn’t understand the words, at least I could follow along! Pickles and Ponies is heavily influenced in places by Russian folklore and traditions – there is a Baba Yaga, a traditional evil witch, and one of the protagonist’s names, ‘Vanya’, is the short form of the Russian name ‘Ivan’. In the fairy-tales I was reading, this was usually the name given to the brave youngest brother, who would complete the quest and save the day.

In teaching English in St Petersburg, I set one of my classes to reading Saint-Exupery’s “The Little Prince”, one of my all-time favourite books. I love its simplicity and its powerful messages, and it definitely influenced me to ensure that my own fairy-tale had ‘morals’ of its own.

Once I had this framework, I decided to fulfill a promise I’d made to my grandmother years beforehand, to write her a book.- and then it was game on!

How Did You Come up With Your Characters?
Melodia was easy – she’s the traditional fairy-tale princess: obsessed with romance, always trying to do the ‘princessly’ thing, and spending all of her time and energy just waiting for her prince. Vanya is in stark contradiction: being born with a voiceless heart, he’s incapable of feeling. It was certainly a challenge writing a character who worked on logic alone, but a challenge I took on gladly! Horse is Vanya’s constant companion, and I wanted him to be noble and emotionally available – almost overly emotional – so that he and Vanya together formed almost one whole balanced person, with logic and emotion working in tandem.

There are a whole host of other characters, but I wouldn’t want to get ahead of myself and include any spoilers, so you’ll have to find out for yourself 😉

Book Sample
From the prologue:

Once upon a time, in a land far away, a prince was in rather a pickle. Not a literal pickle, of course—prince-sized pickles are rather hard to come by. No, the type of pickle this prince was in was a thoroughly metaphorical one. To be honest, he might have preferred the vegetable.

It had all started a long time ago, really, when the prince was just a boy. He lived in the land of Raduga, where everybody was a prince or princess (until they became a king or queen), and so everybody had a palace. And every palace, naturally, had a big and beautiful palatial garden. This is where the young prince was playing when he first met Christina, who was of course royalty herself, and the daughter of the nearby King Andreas. Andreas was the King of Silverfish and Thimbles (hardly an exotic domain), and Christina stood to inherit this kingdom (hardly an exotic dowry). Nevertheless, the prince was lonely, and when he saw a girl wandering in the gardens, he just had to get a closer look.

Randolph, for that’s our prince’s name, crept closer and closer to the girl, darting from tree to tree, until he was so close he could have taken a cherry from her pocket—which is precisely what he tried to do. He clearly didn’t know that Christina was from the relatively bad king-bourhood of silverfish and thimbles, and had not only the fast reflexes of the silverfish she would one day rule, but a comprehensive amount of training in the self-defence art of Le Poke.

Just as Randolph was about to steal Christina’s fruit, she scuttled sideways and dropped unexpectedly into a very unusual pose: half-crouched, one arm raised behind her head, and her front hand jutted out before her. Randolph was rather alarmed. “What on Raduga are you doing?” he asked.

“Stand back!” yelled Christina, “or I’ll Poke you!”

“You can’t do that!” exclaimed Randolph, haughtily. “I’m a prince!”

“Um, so’s everyone who’s not a princess. And I’m a princess, and I’m telling you, I will Poke you!”

Randolph considered Christina’s threatening demeanour and decided to back-track. “How about we just play chasies instead?” he offered.

Slowly, and with a twist of suspicion, Christina lowered her arms and returned to a standing position. “Well,” she said, “I guess that would be okay.”

Years passed, as they do, and Randolph and Christina grew up. Randolph never shook his fascination with Christina’s threat of Poking, and Christina never forgot that Randolph tried to steal her cherry. Nevertheless, they grew closer and closer as they got older, until suddenly, one day, they became Adults.

Becoming an Adult in Raduga isn’t like growing up anywhere else. For a start, it’s not something that you grow into: it’s something that happens to you one day. There’s a whole race of rather vindictive fairies in Raduga, who enjoy nothing so much as turning peoples’ otherwise happy lives on their heads. One day, you might be having a lovely old time running through fields, learning new things, playing chasies with your friends and doing absolutely nothing in the sunshine, and the next thing you know a cloud of gu-fairies is descending upon you and biting you all over. Nasty little things! Luckily, there’s a Queen of Gu-Fairies, and she insists that her subjects let people know you’ve been bitten. It’s not exactly an ideal situation, but at least that way you won’t be stuck alone in a field for a few days.

And why should you be stuck alone in a field? Caterpillars were the first sign of the oncoming gu-fairy plague, and as everybody knows, when a caterpillar gets attacked by the gu-fairies, they go and hang off something high, take off their jacket to show their chrysalis, and cocoon for a few days before emerging as a beautiful butterfly. The process is somewhat similar for humans. Once you’ve been bitten, you’ll crawl off to find the nearest high object, climb it, take off your clothes and hang upside-down for a good long time. After this time has passed, the transformation to Adult will be complete, and you’ll be freed from stasis. Of course, unlike a butterfly, people don’t have wings, and so you’ll fall rather unceremoniously and be dumped on your head. For this reason, children in danger of imminent Adulthood are not allowed to play near cliffs, in case they accidentally hang from them following gu-bites. There were many unfortunate tragedies before that particular policy was implemented by the King of Not-Quite-Adults.

Being afflicted by Adulthood is considered almost a curse by residents of Raduga. Some people are lucky enough to never be bitten, though the majority are. Of course, not becoming an Adult doesn’t mean you don’t get older, and because almost everyone gets gu’d you’ll have fewer and fewer people to play with.

Christina and Randolph were both playing in a sanctioned field together when the gu-fairies got them. They correspondingly crawled to a tree together, bleeding and hand in hand; climbed the trunk to an amenable branch; took off their clothes, and entered stasis. When, five days later, they thudded to the ground (one after the other—thud! thud!), Randolph opened his eyes and saw Christina, Christina opened her eyes and saw Randolph, and they immediately declared that they were in love and would be together forever.

Inevitably, things turned out significantly more pickley than that. Still hand in hand (though with a short break to re-gather their clothes, being strangely embarrassed now that they were Adults), the pair meandered through the sanctioned field, strolled through the palace’s outer gates, passed through the palatial courtyard, and entered the audience chamber. Randolph walked up to his father, the King of Quite Large Fish, and announced that he was now an Adult and entitled to marry Christina, Princess of Silverfish and Thimbles. Whereupon the King of Quite Large Fish, being a long-time Adult, practically-minded, and moreover somewhat of a sadist (after all, he did name his child Randolph) replied rather implacably, “Well, I’m afraid that’s simply not going to happen. You’re already betrothed.”

About the Author:
Laura is an Australian who keeps forgetting she’s meant to stay in the same place. She loves adventures-which is good, because she’s constantly winding up in the middle of them. When she’s not accidentally finding herself in the middle of a riot, being tear-gassed or jumping into frozen rivers, she enjoys sailing, snowboarding, and making an obnoxious number of puns.