You are here: Home / Interviews With Authors / Interview with Author – Michaelbrent Collings 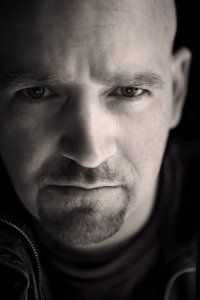 What inspires you to write?
The need to eat.

Seriously, I do this for a living. And while occasionally that bolt of lightning strikes and the angels sing and dance upon my noggin while I scream “EUREKA” and dance naked atop a flagpole, usually it’s just a matter of banging away on the keyboard. Because eating.

Tell us about your writing process.
See above. I sit down with my computer and face off. There can be only one.

Occasionally I square off with a pad of paper. There can still be only one.

For Fiction Writers: Do you listen (or talk to) to your characters?
Once in a while they remind me to groom. This is appreciated. They used to remind me to go to the bathroom, but ever since the permanent catheter this is less of a problem.

What advice would you give other writers?
WRITE. So many people who “want to write as a grown-up job” treat it like a hobby. You want it to be a job, then MAKE IT A JOB. Write for hours a day. If you don’t have hours, then stay up late. I was a lawyer for a decade. I got up at six, worked until six, played with the family until ten or eleven… then wrote until 2 am. Rinse, lather, repeat. I grew a beard to save time on shaving. I got really efficient with my time.

I treated writing like an extra job. Because that’s what I wanted it to be. Eventually that’s what it was. And then one day it was my ONLY job. Muy bueno.

How did you decide how to publish your books?
I tried to publish traditionally. If you had covered me in gold dust and rolled me into those offices they wouldn’t have touched me. So I put my books up on Amazon and they did well! I work hard at it – writing four to eight books a year, marketing like a religious fanatic among the Savages of Olde Tymes – but it’s a lot of fun. Love it.

What do you think about the future of book publishing?
It will happen sometime after today.