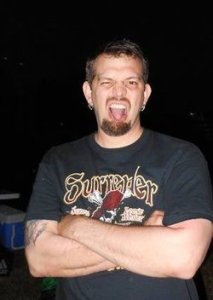 About Marc Richard:
Marc Richard is an author of horror, love stories, science fiction, and literary fiction that is otherwise unclassifiable. He even authored a semi-autobiographical novel about Borderline Personality Disorder. He promises something to read for every interest. All of his novels are peppered and spiced with his dark, twisted sense of humor. Originally hailing from Rumford Maine, he calls Portland Maine his home. He has an award winning personality, and is very handsome, according to his mother.

What inspires you to write?
I am inspired by other writers, as well as film makers and musicians who have a unique voice (e.g. Douglas Adams, Christopher Moore, Kurt Vonnegut, Carlton Mellick III, David Lynch, Cohen Brothers, Mike Patton). I also inspire myself, on occasion.

Tell us about your writing process.
Normally, I just sit down in front of the computer and type. I let the story write itself. I allow the characters and storyline to surprise me. Some ideas I have require an outline, such as a project I have going that incorporates a music CD, or other oddly-structured thingamajigs.

For Fiction Writers: Do you listen (or talk to) to your characters?
I don’t allow my characters to email, phone, or text me. However, if I saw them on the street, I would probably stop and say a brief hello. But no eye contact.

What advice would you give other writers?
Write what you know. Also, write what you don’t know. Don’t ever get discouraged. Everyone has a voice, and someone, somewhere, wants to hear what you have to say.

How did you decide how to publish your books?
I tried going the route of hooking up with an agent, but there was so much red tape and junk involved, that I stopped. It wasn’t until I had five books already written that I decided to take matters into my own hands and start Sucks Publishing. So far I am the only client, but I want to help other people get their books off the ground some day.

What do you think about the future of book publishing?
“Books” will all be transmitted telepathically, and you will be able to dream them when you go to sleep. Conversely, people will be able to upload their own dreams and market them as “books” for others to enjoy.