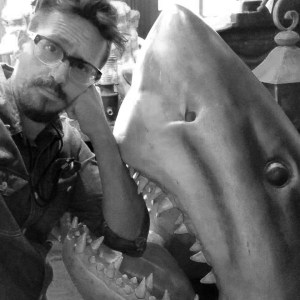 About Jose Prendes:
Jose Prendes was lured to the beautiful world of make-believe from an early age. After losing his mother in a car accident and his father, who was a political prisoner in Cuba, to cancer, he retracted into the world of movies and books. Finding a home in the world of pretend, he decided to make it his life-long ambition to join the ranks of the great entertainers.
He dove headlong into film studies and in 2000 graduated with an Associates Degree in Film from the International Fine Arts College in Miami. That same year he published his first novel, a horror thriller titled: The Harbinger.
In 2001, while at a monster convention, Jose was inspired to put his money where his mouth was and make his first feature film, The Monster Man. This modestly low budget first effort managed to receive worldwide distribution in 2002, and whet Jose’s appetite for bigger and better. In 2003 Jose wrote, directed, starred and produced Corpses Are Forever. This bigger budgeted, shot on 35mm feature was a zombie/spy movie hybrid and it received worldwide distribution through Asylum Entertainment, the makers of Sharknado.
After moving to Los Angeles with his wife Jessica and their new baby daughter, Abby, Jose went to work for the Asylum as a screenwriter. Jose went on to write seven films for Asylum including the upcoming Mega-Shark Vs. Mecha-Shark and directing his third film, the well-received haunted house chiller The Haunting Of Whaley House.
Since then, Jose has written the first novel of what he calls the Sharkpocalypse Trilogy, Sharcano. The hope is to do for sharks what Max Brooks did for zombies. He is also currently developing a horror feature titled The Divine Tragedies starring Barbara Crampton and a western feature film titled A Magnificent Death From A Shattered Hand with Thomas Jane, who is attached to produce, direct, and star alongside Nick Nolte and Jeremy Irons.

What inspires you to write?
Everything. Also, if I don’t write then my brain explodes.

Tell us about your writing process.
I usually have a concept and I let it marinate in my head. Then when I think I am ready I will do a basic outline to know all the scenes and story beats, but nothing too formal, because I want it to feel spontaneous and organic. Once I have laid down an eco-skelton of an outline, I start writing and usually I refer to the outline only casually, because if the story has me, then it has taken a hold and is dragging me along for the ride. I bang out between five to twenty pages in a single day, depending on outside factors like boring old real life.

For Fiction Writers: Do you listen (or talk to) to your characters?
I listen and type what they say. They dictate, because in some corner of the universe they are alive and channeling their wild words into my head. At least that’s how it feels sometimes. I am constantly surprised by what they do and say, which has to mean it comes from outside of me somehow.

How did you decide how to publish your books?
Curiosity Quills was the right home for me. They responded to the material, were amazing and respectful of the work, and I couldn’t be happier working with them.

What do you think about the future of book publishing?
Book will never die, but how we enjoy them will change. Who knows if book brain implants will be the hot new Christmas item 20 years from now!