You are here: Home / Fiction / Paranormal / Doubt, Among Us Trilogy (book 1) by Anne-Rae Vasquez @write2film 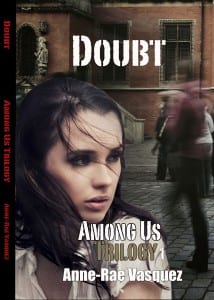 Doubt is the first book of the Among Us Trilogy series.

At 21 years old, Harry and Cristal are fresh out of university with their PhD’s. Labeled all their lives as being ‘weird’ and ‘geeky’, they find true friendships with other outcasts by playing online virtual reality games. Now they face the challenges of starting out in the work force, while at the same time trying to get used to their ‘adult’ identities. Harry Doubt, a genius programmer and creator of the popular online game ‘Truth Seekers’, has a personal mission of his own; to find his mother who went mysteriously missing while volunteering on a peacekeeping mission in Palestine. His gaming friends and followers inadvertently join in helping him find her; believing that they are on missions to find out what has happened to their own missing loved ones. During Harry’s missions, Cristal and the team of ‘Truth Seekers’ stumble upon things that make them doubt the reality of their own lives. As they get closer to the truth, they realize that there are spiritual forces among them both good and evil, but in learning this, they activate a chain of events that start the beginning of the ‘end of the world’ as they know it.

Among Us is a book series which delves into the world of the super natural and how it intersects with the every day lives of seemingly ordinary people as catastrophic events on Earth lead to the end of times. Among Us will attract fans of the TV shows Fringe, Lost, and 4400.

How is Writing In Your Genre Different from Others?
Writing in the urban fantasy, paranormal fiction genre gives me an opportunity to experiment different ways to connect with fans which I could not do with my first book. After reading many marketing “experts” and blog topics about how to grow your fanbase, I grew bored with the strategies that they were pitching.
The TV series Fringe pushes the boundaries of story telling where the writers and creators of the show manage to make the unbelievable seem possible. Unconventional story telling, multiple story lines, time travel, alternate universes and paranormal events mixed with conventional FBI criminal drama is a combination which could spell disaster for the producers if not done well. J.J. Abrams and his writing and production team were able to mix the right amount of fantasy and reality to produce intelligent and creative episodes with multiple story arcs that has attracted a cult following from all over the world. If J.J. Abrams did not have the courage to push the boundaries of reality, there would be no shows like Fringe (which would be a pity for people like me who enjoy a good urban fantasy thriller).

What Advice Would You Give Aspiring Writers?
First and foremost, believe in yourself and your work. If you don’t, no one else will.
Like JJ Abrams, creators just want to tell a story and entertain people. So why only focus in one way of telling it? Give readers another way to connect with your story. Entertainment does not need to be contained in one medium. Think about telling your story in many mediums.
Start creating your online presence even before you start writing. You need to build interest in your work when it is time to release. Create a website about your book, blog about your experiences, find people who might be interested in your book locally and on social media. DO NOT PROMOTE on social media. Make friends, share ideas. Build relationships. When your book is ready to publish, you can reach out to your social media friends. When you do good things for others, more than likely they will do good things right back.
There are rules to the game but I don’t believe that we need to be bound by them. If it feels appropriate to follow the rules, then by all means, follow them. If it feels better to break the rules, be creative and do it.

Author Bio:
Anne-Rae Vasquez’s latest work Doubt, Book 1 of the Among Us Trilogy will be released on November 13, 2013. Among Us is a book series about a group of outcasts (online gamers) who band together to investigate who or what is behind the catastrophic events happening around the world. Her previous novel, Almost a Turkish Soap Opera, was adapted into a screenplay and later produced into an award winning feature film and web series and was her directorial debut. Her other works include: Gathering Dust – a collection of poems, Salha’s Secrets to Middle Eastern Cooking Cookbook published by AR Publishing Inc. and Teach Yourself Great Web Design in a Week, published by Sams.net (a division of Macmillan Publishing).

What Inspired You to Write Your Book?
I wrote the first chapter after I woke up from a dream with a vivid image of the beginning of the end of the world. It was so clear in my mind that it frightened me. The only thing that gave me hope was that in the same dream, there was a group of young people who risked their lives banding together to try and save the world. Perhaps my dream was inspired by what I’ve seen in the news where young people around the world are fighting back against their governments’ oppressive policies. This wave of ‘Truth Seekers’ is evident with the recent “Arab Spring” and other youth led revolutionary protests and peaceful activism against governments who resort to terror and bloodshed to suppress their voices.
The book is also a tribute to Aaron Swartz and Harry Fear. Aaron Swartz, an internet prodigy and activist, was an active member of the open source movement and co-founder of the Creative Commons and Reddit before he died in January 2013. Harry Fear, is a journalist and documentary filmmaker, whose fearless coverage of the conflict in the Middle East inspired many youth to speak out the truth on social media.
At that time, I was shaping out who would be the hero of my story and I decided that I wanted someone like Aaron, intelligent beyond his years, courageous and a seeker of truth and justice; and someone like Harry Fear who risked his life to cover the true story in the Middle East conflict. Both Aaron and Harry are real truth seekers, my main inspirations for the main character Harry Doubt.
I have taken this same theme of Truth Seeking and applied it to the fictional story ‘Doubt’.